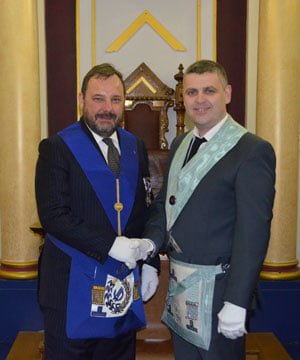 The members of Andrew Lodge No 3328 were pleased to welcome Kai Hughes Past Grand Orator on his second visit to the lodge held at Eccles Masonic Hall. The purpose of his visit was to give an oration titled ‘Why bother about ritual’ to the 36 members and visitors who were present.

Kai is welcomed by the worshipful master Liam.

Kai, accompanied by David Durling the South Eastern Group Vice Chairman, were welcomed into the lodge by the worshipful master Liam Linacre.

Kai was initiated into the Lodge of Harmony No 309 in the Province of Hampshire and the Isle of Wight in 1985 as a young Royal Naval Officer. He ‘retired’ in 1993 and moved up to Cheshire where he immediately joined local Freemasonry and is currently the DC of University Lodge of Liverpool No 4274. However, Freemasonry wasn’t always so prominent in his life and he often searched for its relevance in a young professional’s life. Following a chance meeting in a lodge in Frankfurt – Carl zum aufgehenden Licht Nr 273 under the United Grand Lodge of Germany – changed his Masonic outlook. He witnessed a truly magnificent first degree ceremony where afterwards the candidate was instructed in what he had been through and its symbolism and meaning. From that point he realised that Freemasonry had a deeper inner message than just charity and ‘brotherly love’.

This interest in the inner meanings of Freemasonry and the interpretation of its symbolism led him to be appointed the first Grand Orator in 2010, a position he held for three years before UGLE abandoned the orators’ scheme and merged it with the mentoring scheme. Therefore his apron and jewel are totally unique as the first and last Grand Orator under the United Grand Lodge of England. 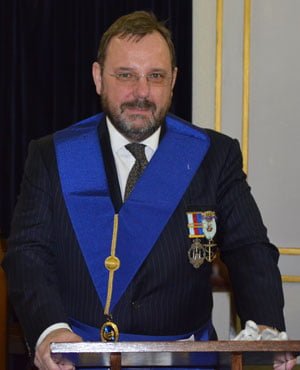 Kai at the lectern.

In his oration at Andrew Lodge, Kai was building on a talk that he gave last year entitled ‘Initiation! What’s the Point?’ On this occasion he got the lodge to debate the relevance of the ritual in our ceremonies and whether it was necessary to learn the ritual by rote or could we just read it. Despite now being the Past Grand Orator, Kai is always available to deliver orations and talks on the Craft and Royal Arch when he can.

Before delivering his oration, Kai asked that the brethren listened carefully to what he was about to say that would trigger some thought provoking questions. Following his oration he asked the brethren what their thoughts were about learning the rituals off by heart or by reading them straight from the book. What did it mean to the candidate? Did the candidate understand what had been said to them? Did the ritualist understand what he was saying? Is there anything wrong with a ritualist who is incapable of learning the ritual word perfect and purely relying on reading or being prompted? 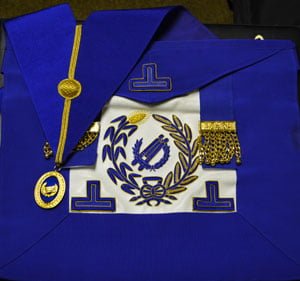 These were thought provoking questions which raised much debate and opinions from the brethren and left them with much to think about. His message was: “We should all try to not only learn the ritual but more importantly we need to understand the meaning of what we are saying”.

On conclusion of his oration, the WM thanked Kai on behalf of the lodge members to much applause from the brethren. The lodge being duly closed, the brethren retired to enjoy the festive board and continue with much conversation about the topic that Kai had spoken about.

Today Kai is CEO of the International Cotton Association which is the trade body that has regulated the global raw cotton trade from Liverpool for the last 175 years and he is also a part-time diplomat being the Estonian Honorary Consul for the North West of England.

Much fun and friendship and laughter continued throughout the evening and Kai was presented with the traditional Eccles cakes to take home for his supper.