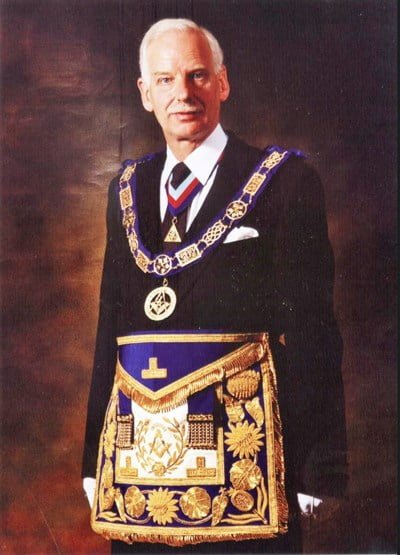 Over 700 people from Cheshire and beyond attended Gawsworth Hall on 11 July to pay tribute to Cheshire’s RWBro Timothy Raymond Roper Richards, who was Provincial Grand Master and the Most Excellent Grand Superintendent for 13 years between 03/09/1996 and 30/5/2009  RWBro Timothy Richards became a Freemason at the age of 21 in the Lodge of Unity where he remained a staunch member for 54 years, along with being a member of 26 other Lodges and honorary member of many more. He was a popular figure amongst Cheshire Masons and beyond.

The Memorial Service was held in the Open Air Theatre at Gawsworth Hall and conducted by Bishop William from Gawsworth Church assisted by clergy and the choirs from The Thomas Cranner and Gawsworth Churches.  A Masonic Eulogy were given by VWBro Cyril Acton Past DPGM in which he referred to just a handful of Tim’s past ventures. Freemasons in Cheshire held him in great respect as a well-known and remarkable Cheshire Mason and he will be well remembered throughout the Province

Tim and Elizabeth at the 2016 Festival Dinner