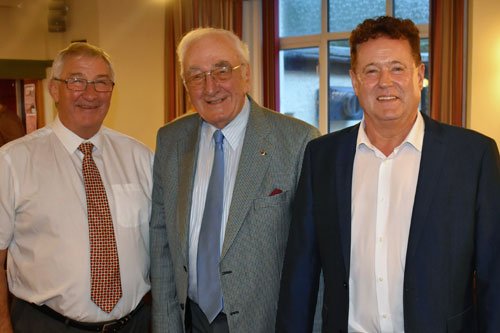 “Our halls are not only the places where we hold our Masonic meetings but are the venues for most of our fund raising efforts for good causes. Charity being at the very heart of Freemasonry, the halls are a vital part of our fraternity.”

These were the words of Furness and South Lakeland Group Chairman Peter Schofield at a function held at Barrow-in-Furness Masonic Hall to mark Oliver Chalker’s 55 years of service on behalf of the hall members.

Oliver was elected onto the hall committee a couple of years after it had moved from Abbey Road to its present home in Fairfield Lane. He has served on the committee throughout the intervening 55 years. Following several years as chairman he has served as president for the past 28 years until he stood down from that role at the annual general meeting in 2017.

Hall chairman Ken Robinson made a small presentation to Oliver and remarked: “Oliver has given outstanding service to the hall committee. Over the years all the members have benefitted from his commitment and efforts. The wealth of knowledge he has accumulated in that time has proved invaluable and I know that he will still be someone we can go to for help and advice.”

In response Oliver commented: “Although sometimes difficult to fit it in when I was working, it has always been a pleasure to serve on the committee. I have seen many changes such as the landscaping of the grounds and the creation of the car park. The changes over the recent few years have seen the hall adapt and update itself to become a much sought after venue for weddings and other functions. I am sure that it will continue to go from strength to strength.”