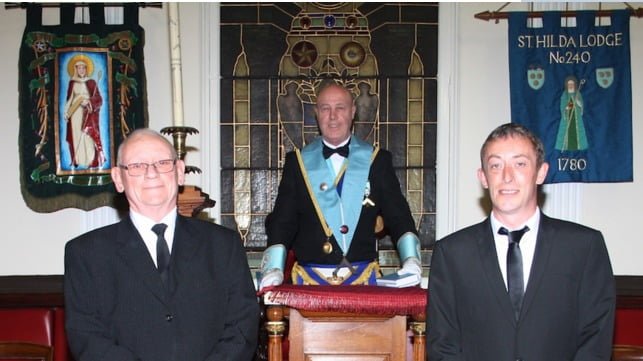 The oldest lodge in South Shields hosted a most pleasing duty as they initiated a father and son into St Hilda.

Having taken the decision to join freemasonry, brothers Michael John and Michael Lee Flynn were keen to make this a night that brought father and son even closer together. The brethren assembled must have wondered what to expect when, just before the Tyler knocked, a sinner had left their phone ‘off’ silent and the Rocky theme tune rang through the room. However the ‘Rocky’ start was quickly dispelled by well worked presentation and ceremony by all involved, as father and son were joined in unity as brothers. As those who know would be only too quick to recognise, this was also a big night for the Junior Deacon and Andrew gave an exemplary demonstration of his prowess.

The evening continued downstairs with the camaraderie that the Flynn brothers had been hoping to experience and will doubtless continue to do so. Michael Snr spoke of his long standing knowledge of the Freemasons which was heightened by his doing building work in the hall together with attendance with masonic friends, at the public access Freemasons Club on a Friday night, where the friendly Mackem Bar Steward serves guests to the bar with great geniality and aplomb. These nights were also enjoyed by his son and after making enquiries the process began which led to this joint initiation.

Once joined in their building careers, retirement and a slight change in path has separated that daily connection, although Michael Jnr does include his father in his work when home from his travels down the country. Freemasonry now allows another connection which, together with the friendships they will make, will grow as the degrees and the years pass.