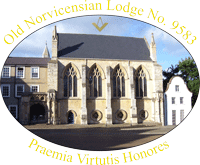 The Lodge Meetings are held on four Saturday mornings during the year at the Wroxham Masonic Hall, followed by a lunch. At one of the Meetings, usually in April, ladies and non-Masonic guests are also invited when there is a speaker to talk about a subject either related to a local charity or the School. The Lodge, since its inception, has raised several thousand pounds for charitable causes and the School.

Although having had to move its Meetings away from the School because of lack of space, the Lodge remains keen to maintain its links with Norwich School. One of the ways of doing this is to identify a charitable cause or project associated with the School, which the Lodge could support.

The Old Norvicensian Lodge welcomes both Initiates into Freemasonry and current Masons. Membership is not just open to Old Boys of the school and male relatives of pupils past and present (ladies have their own Lodges), but from anyone with an interest in Freemasonry.

To find out more about the Old Norvicensian Lodge and how to join, please contact the Lodge Secretary.