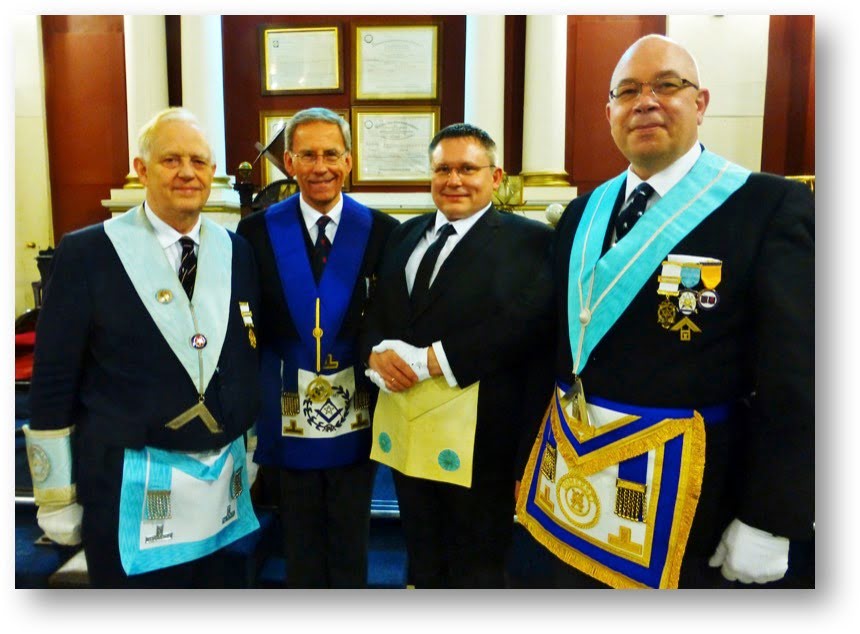 The Regular meeting of Old Aluredian Lodge (OAL) on Saturday 12th March opened with the Worshipful Master, WBro R Cox welcoming guests including the RW Provincial Grand Master accompanied by six Officers on a fraternal visit. The offer of the gavel being declined, the Wm offered a cheque £800 for Somerset 2020 Festival which the PGM instantly recognised qualified the Lodge for their 1st Ashlar. RW Bro Stuart said he happened to have a spare badge in his case which he took a great delight in presenting later!

The Wm invited WBro S Casling, Wm of Richard Huish Lodge (RHL) to take the Chair and with the continued support of the Officers of OAL he opened in the 2nd Degree, to conduct the ceremony of ‘Passing’ Bro Kris Mews a recent Initiate to RHL, which he undertook in a most competent manner, before returning to 1st Degree and returning control to WBro Cox.

Five school lodges comprise the Taunton Area Cluster of the Federation of School Lodges, all of whom have just four meetings a year, including Installation. As RHL has hit a ‘purple patch’ with initiates, it was convenient for both lodges that OAL should act as host lodge on this occasion helping to avoid a need either for a ‘double ceremony’ or a potentially frustrating delay for candidates. Members of both lodges agreed the arrangements were excellent producing an enjoyable and practical compromise. Approximately twenty brethren from Richard Huish Lodge attended as guests to support their Wm and Candidate.