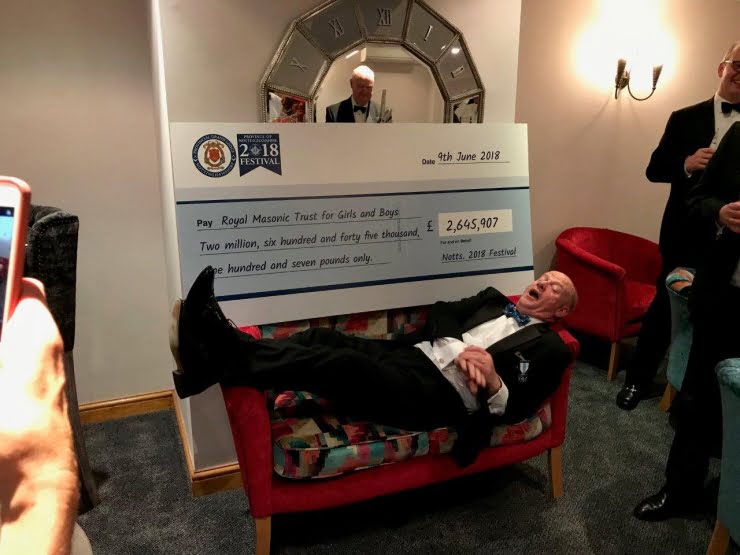 Pro Grand Master Peter Lowndes was the guest of honor at the conclusion of the Nottinghamshire 2018 Festival, which raised over £2.6 million for the Royal Masonic Trust for Girls and Boys

The day started with a celebration for young people. Children’s charities supported by Nottinghamshire Freemasons were invited to a spectacular outdoor event, free of charge, in the grounds of Kelham Hall near Newark. Over 1,000 people attended the event which included riding for the disabled, face painting, craft workshops, fairground rides and bouncy castles. The young people enjoyed a day of fun in a safe environment which was marshaled by Freemasons and the Nottinghamshire Scouts.

The evening celebration was attended by Freemasons from Nottinghamshire who had generously supported the 2018 Festival. A drinks reception in the late afternoon sunshine was followed by a banquet held in the Great Hall and Carriage Court of Kelham Hall. Over 560 Freemasons and their partners attended along with Freemasons from the surrounding Provinces and leaders of the Masonic Charitable Foundation.

Following a series of speeches by the leaders of the Festival and VIP’s, the Chief Operating Officer of the Masonic Charitable Foundation, Les Hutchinson, revealed the Festival total to the expectant gathering. He explained that the amount raised of £963 per member was the second highest ‘per-capita’ figure raised in any Masonic Festival – and second only to Nottinghamshire’s total from their previous Festival.

The incredible six-year period of fundraising was concluded with a spectacular concert. World-renowned girls’ choir Cantamus started the concert with enchanting performances of popular music tracks.