As usual the Northumberland County Show was held at Bywell on May Bank Holiday Monday. The weather was not brilliant but although chilly it stayed dry and the sun finally shone at 4o’clock. The Provincial Grand Lodge of Northumberland was once again represented by Dave Watson, Andrew Smith, Richard Whiteley and two new kids on the block, Jeff Bulman and Clay Sloan. The object of the display stand as always was to enlighten the public about Freemasonry.

New and better photographs and more up to date charity information gave the stand a much better appearance. However, our tailors dummy “Chip” still looked the same! We had visitors from Scotland, Wales, Durham, Leicestershire, Essex, Kent, Cornwall, South Africa and Australia. As well as a couple of folks interested because their friends are in a Lodge (but are waiting to be asked to join – a common misconception), we had some guys who either had moved to Northumberland (or had not found a Lodge) or were about to move into the Province from other areas. The sentiment from every Mason we spoke to was overwhelmingly supportive – “Should have done this years ago” being a common theme.

As usual, another highlight was the numerous kids recognising the teddies and one mother who saw them and gave me a lovely ‘thank you’ hug on her daughter’s behalf and another who gave us a £5 donation for a teddy to give to her 28 year old daughter who was having a pretty miserable time in hospital.

Quite a busy day for the guys on the stand but it was very worthwhile! 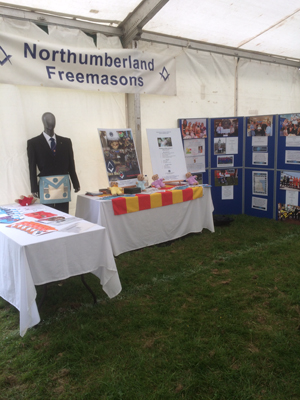 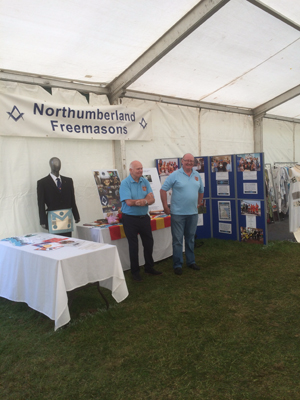