Thornton Little Theatre was the venue once again for the North Fylde Group charity show and the theme this year was Sunday Night at the Palladium. The host and compere for the evening was Hugh Mett and the musical director was Shaun Haynes. The talented cast members were either North Fylde Masons or their close family members.

Hugh opened the show with ‘Secret love’ and then introduced his good friend and erstwhile golfing partner Johnny Roxx aka Simon Slater, who kept the audience entertained with a selection of rock and pop classics. The next act to perform was 18 year old Matthew Baldwin who has secured a place at the Northern College of Music and he was a revelation singing ‘O Isis’ by Mozart and ‘Old Man River’ from the musical Showboat.

Next was the popular game ‘Beat the Clock’ and much amusement was to be had from the struggles of contestants Dex and Helen Wilde with Paul and Yvette Hardy. The first game involved tennis balls and ended up as a draw.

Katie Tomlinson who is a young vocalist/guitarist was next on the bill and she performed a selection of numbers from contemporary artists such as Ed Sheeran. This was followed by the hilarious talents of well known local comedian Ryan Gleeson who performed comedy magic which had the audience in fits of laughter.

Regular performers at this event are Paar 3 and they concluded the first half of the show and, even without the ubiquitous Roger Lloyd-Jones, entertained with a selection of songs from West End shows with their usual polish and finesse.

Hugh Mett and his banjulele opened the second half of the show with the George Formby number ‘Leaning on a lamp-post’. This was followed by an excellent guitar recital, including Cavatina, from local musician Chris Hodder who received one of the biggest cheers of the evening.

Hugh hosted another ‘Beat the Clock’ game involving balloons with the two brave couples from earlier back on stage. More hilarity followed and both couples were declared winners of a valuable prize each, a chocolate Easter bunny. Next to perform was Bob Sims, a member of the Magic Circle and a veteran of this show. He delivered his illusions with much confidence and poise.

This paved the way for the introduction of the top of the bill, Mr Lionel Vinyl aka Norry Ascroft. He is a fabulous entertainer and was on top form as usual, getting everyone to dance along with him to classic 70s disco favourites. He was joined on stage by several of the cast of the show for the finale of ‘Stayin alive’, the end of which prompted calls for an encore, which was duly obliged with ‘Blame it on the boogie’. 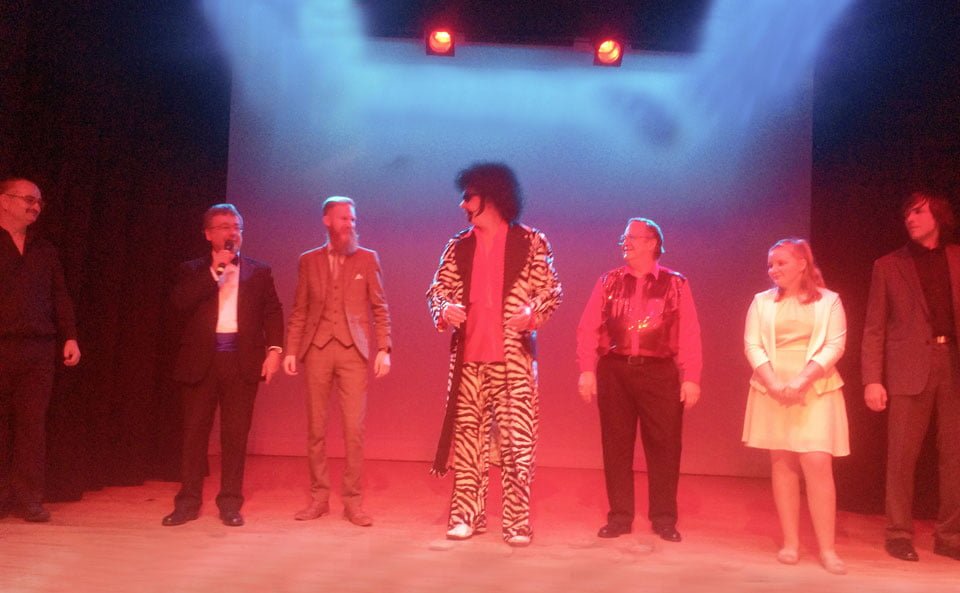