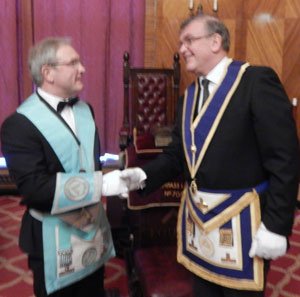 When Assistant Provincial Grand Master Derek Parkinson attended the installation meeting of Compass Lodge No 7052, he did not require a compass to find his way. Derek has visited the Adelphi Hotel a number of times already this season and if the hotel still had a uniformed doorman as in by-gone days, he would certainly recognise Derek by now!

Roy Williams thanks Jim Hawkins for installing him in the chair of King Solomon.

The lodge was opened promptly by the WM Jim Hawkins and after the minutes of the last regular meeting were confirmed and signed the installation got underway. 20 members and nine guests were to enjoy a magnificent ceremony directed by the DC John Cairns.

The lodge was opened in the second degree and subsequently the third degree in preparation to receive Derek, who was outside the door of the lodge and demanded admission, which was his due right. Derek accompanied by Gladstone Group Vice Chairman John James together with other grand and Provincial grand officers were admitted. After being greeted by Jim who offered Derek the gavel, which of course Derek declined as he was well aware that Jim had rehearsed the ceremony and he was not about to steal his glory.

The lodge adjourned in the third degree and resumed in the second degree when Jim requested David Potts to occupy the senior warden’s chair and Ken Jones to occupy the junior warden’s chair. Mike Hilton then presented Roy Williams as the master elect. The ancient charges and regulations were read to Roy, to all of which he agreed. Roy then repeated the obligation of a master elect. 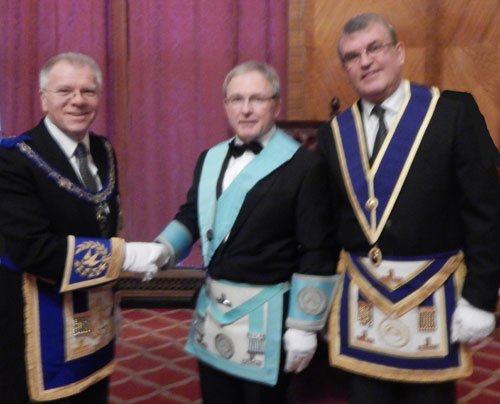 The working tools were presented impeccably by the following brethren; third degree by Jim Hawkins, second degree by Mike Stroh and the first degree by David Smith. After appointing his officer’s for the ensuing year, Roy received his address from John Cairns, which was delivered with genuine sincerity. Ken then addressed the wardens following which Derek addressed the brethren of Compass Lodge.

When the ceremony of installation was concluded, Derek rose to congratulate Roy, the installing master Jim Hawkins and the DC John Cairns, on a fine ceremony. He also conveyed the congratulations of the PrGM Tony Harrison, who he said wanted to wish Roy health and happiness for his year in office. Roy thanked Derek and on behalf of himself and the brethren of Compass Lodge, presented him with a cheque for the magnificent sum of £500 payable to the West Lancashire Freemasons’ Charity. Derek thanked Roy and the brethren for their kind donation.

Following communications from Grand Lodge, Derek and other grand officers retired. Prior to the lodge closing, a ballot was taken following a notice of motion that John Hawkins be elected as an honorary member. The brethren voted unanimously in favour. This was followed by loud applause as to a man, they agreed it was thoroughly deserved due to his many years of loyal service to Compass Lodge. 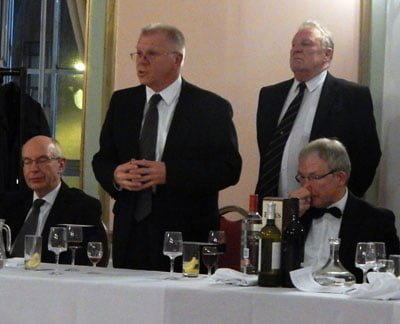 Derek Parkinson responds to the toast to grand officers at the festive board.

The brethren were soon seated at the festive board to enjoy a fine meal with ample liquid refreshments. The toast to the guests was given by John Cairns, who was responsible for inviting most of the guests. The response to the toast was given by Geoff Holly of Harmonic Lodge No 216, who had the assembled brethren rolling with laughter when he related the story of the last wooden sailing ship to leave Liverpool back in 1920. It disappeared without trace, the ship, the crew and its entire cargo of 7,000 woodpeckers.

Finally, the newly appointed tyler Brian Jones gave the tyler’s toast and the members and guests bid each other goodnight, in the knowledge that the night had been a great success and the new master could savour the evening’s events for many years to come. 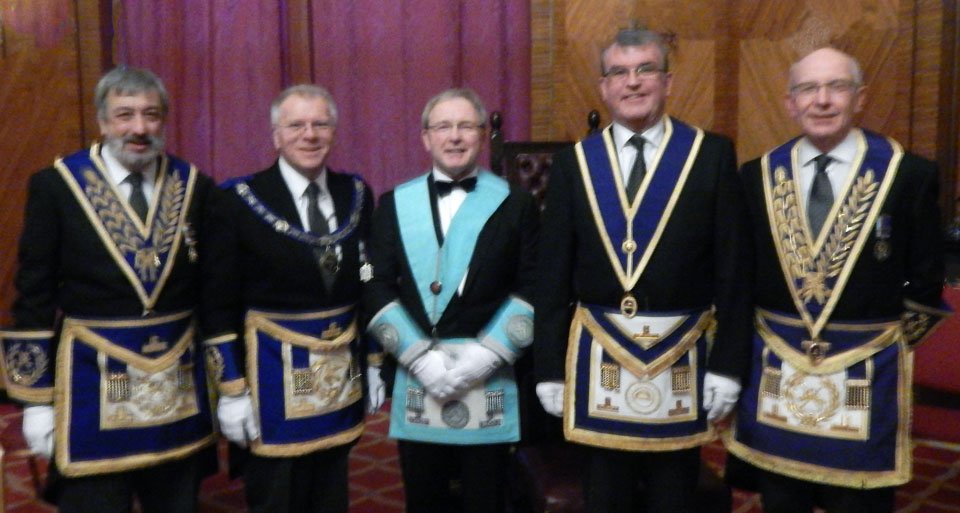