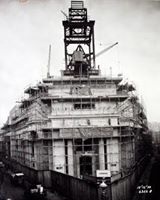 In 1908 The Connaught Rooms were named after the then Grand Master, the Duke of Connaught and became one of the most popular venues for social and corporate events . They were built upon the site of the Freemasons Tavern and in 1910 this building was replaced with the current structure.

Next to the New Connaught Rooms stands Freemasons Hall. This magnificent structure is the only Grade II listed Art Deco building in London which has been preserved ‘as built’ both internally and externally. It was built between 1927 and 1933 and is in fact the third hall on the site. It was designed by H.V. Ashley and Winton Newman, following an international architectural competition chaired by Sir Edwin Lutyens.

In 1775 the premiere Grand Lodge purchased No. 61 Great Queen Street, a house with a garden and a further house behind it. A competition was held to design a Grand Hall to link the two houses. The winning design was by Thomas Sandby. In 1820 the hall was extended by Sir John Soane but his work disappeared during the building of the second hall in the 1860s which was designed by Frederick Pepys Cockerill. Further property had been acquired to the west of the original and Cockerill managed to incorporate Sandby’s grand Hall into his design. In fact the grand Hall survived until 1930 when it had to be demolished as it was suffering from severe structural damage following a fire in 1883. Most of Cockerill’s Hall was also demolished to make way for Ashley and Newman’s Freemasons Hall although the eastern end survives as part of the Connaught Rooms. 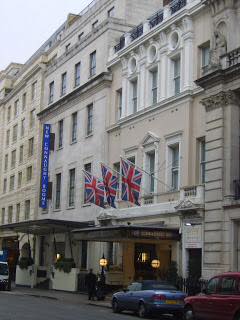 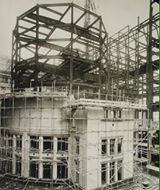 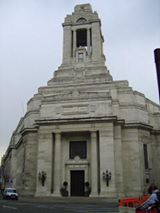