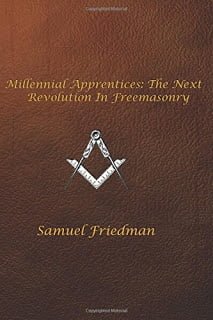 On my flight to Las Vegas a couple of weeks ago, I had the opportunity to read a book that had found its way to me by a circuitous route. The author had sent a copy to my lodge back in November (kind of odd, since my contact information is all over the web and I’m really easy to find). I retrieved it from my lodge Secretary, placed it in my apron case the night of our Past Master Degree, and then promptly forgot it was there until April when I was packing for Las Vegas.

So, my deepest public apologies go out to Brother Samuel Friedman, the author of Millennial Apprentice: The Next Revolution in Freemasonry (2015). Brother Friedman is a New York Mason who joined at the age of 21 – just three years ago – and represents three generations of Freemasonry in his family. (His father, Richard Friedman, is currently the Chairman of the Custodians of the Work of the Grand Lodge of New York.)

Brother Samuel has written a book that answers many of the questions that some older Masons are now asking within the fraternity about the generation of men who will succeed them in passing on our traditions. Now normally, I don’t care for works that attempt to make broad generalizations about artificial categories of population cohorts. As a “baby boomer” myself, I realized there were huge differences between the men in my so-called generation who were born in 1946 versus those born in 1964. I wasn’t part of the group, for instance, who were drafted and did military service in Southeast Asia – I didn’t even have to register for Selective Service. I also spent every weekend of my formative teenage years volunteering at a railroad museum, where all of my friends were in their 40s and 50s. So, despite the stereotyped “anti-establishment” mindset that was often ascribed to “boomers,” I was extremely conservative in my social, political, and economic views before I could even drive a car. That kind of breaks the generalized mold of what boomers are supposed to be like.

So, I have much the same skepticism when people start discussing “the millennials,” who were born between the mid-1980s up to about 2000. In fact, there’s nothing quite so disheartening as a room full of Masons in their 70s making organizational plans based on “what young people want.” Hell, I’M too old to know myself! So, it’s difficult when I speak somewhere and Masons start asking me these kinds of questions. All I can do is make a few guesses and pretend I know.

Brother Samuel Friedman doesn’t just guess. He’s living through it right now, at the age of 24, with a long and active Masonic family history behind him. More important, he has taken an approach few have done in this fraternity – he’s actually researched a stack of independent polls to get a clearer understanding of the philosophical, religious, social, and economic habits of his own age group. Yes, they are of course generalizations, but they are far more useful to us than mere anecdotes and guesses.

I think his book is important enough to provide more than just a cursory blurb about it, so forgive me if I go on for a while about its contents here (and please don’t let this long preview dissuade you from actually investing in the book and reading the whole thing).

First, Samuel is very fond of the “observant lodge” concept. This kind of lodge, promoted by the Masonic Restoration Foundation and thoroughly explored in Andrew Hammer’s book, Observing the Craft, is growing in popularity in the U.S. and Canada. There are currently 44 of these lodges at work in 23 states, and their number is growing. While they are not all alike in design or practice, they are usually hallmarked by excellence in ritual, formal attire and white gloves, higher dues, Masonic education at every meeting, and a festive board at a fine local restaurant. They often require longer waiting periods between degrees, and some expect candidates to write a paper about what they have learned before proceeding. They often hold their meetings by candlelight. Some play contemplative music between orders of business. Some place their EA candidates in a Chamber of Reflection before his degree (originally derived from the European Scottish Rite tradition – and in jurisdictions where it is not permitted as part of the ritual, it is simply done before the lodge officially opens). And once a man is raised, he is not immediately pressured into then joining an appendant body, and another, and another. He is instead encouraged to first fully participate in the Blue Lodge and what it has to offer, because he has a lifetime to go join another body if that is his choice. None of these practices are especially shocking or even innovative – and yet, there remain some states that prohibit observant lodges from being chartered (or existing lodges converted) in their jurisdictions. That is short-sighted.

It is Brother Friedman”s contention that these lodges will continue to grow in popularity, especially among millennials. As a group, they tend to have more interest in esoteric subjects like philosophy and symbolism than do many of their older brethren. They expect a high quality lodge experience, and they understand that such a lodge must be paid for. They don’t especially look forward to cold spaghetti on paper plates. And they expect the attainment of Masonic degrees to require work beyond simply parroting back memorized questions and answers, or showing up for an “all the way in one day” group event. They expect initiation to be an individual transformative experience, and they don’t mind waiting for it. And they fully recognize that lodges that are run this way may not be for everyone’s taste.

(On a personal note, I am a member of an observant lodge myself, and while we are successful with close to a 85% participation rate at our quarterly meetings, I don’t see them becoming the dominant style of lodges in the future. Rather, I see them as giving visiting Masons individual ideas to take back to their lodges and adopting the features they like.)

In another chapter, Brother Friedman digs into various studies concerning the social fabric of America as it exists today. Right off the bat, he points out that the baby boomers literally changed everything in society from the 1960s forward, in part simply because of their enormous population numbers (over 75 million). From the civil rights movement, the sexual revolution, the rebelliousness as a generational force, to music, economics, technology, and much more, the boomers redefined society in ways that shocked the generation that came before them. But what few people realize is that the millennial generation is currently the same size – also 75 million. The two groups taken together now make up more than 25% of the U.S. population. By 2020, according to Samuel’s notes, millennials will make up 50% of the nation’s labor force, and they are already having a huge influence on social change, just as the boomers had before them.

Samuel cites several studies and sources (mostly not Masonic ones) to establish broad trends for the generation, and several of them are quite surprising. For instance, while boomers had little respect for the older generation, 8 out of 10 millennials tend to believe that older generations have “higher morals,” and 60% of them say they consult their parents for advice about adulthood. But he finds that while younger men do not despair that their lodges have many older members than young ones, they do resent being excluded by them from leadership positions and decisions. They dislike it when a lodge or grand lodge is run like a “good ol’ boy’s club.”

Millennials are also the most diverse generation in U.S. history, by race, faith, and sexual orientation. Some 40% of them are racial minorities; 43% are religious minorities; and 70% believe in the legality of gay marriage. As a result, they do not expect their lodges to be overwhelmingly white and Christian, and they absolutely find discrimination to be abhorrent. They are the most highly educated generation the country has ever had, with almost 50% of them between ages 25 and 34 holding a college degree. Just 11% are interested in Masonic history. Only 12% are interested in a lodge or grand lodge’s charitable programs. And yet, they are not cheap or uncharitable – a massive 87% say they give $100 or more a year to charity. While the vast majority of them do not attend regular religious services, almost half of them say they pray at least once a week, and 75% describe themselves as “spiritual.”  Some 46% of millennial Masons say they joined because they were searching for personal of spiritual knowledge.  All of these results and more give a more well-rounded view of the millennial generation than perhaps many of us have had, and I urge you to seek out this book, if only for this very extensive chapter alone.

Two other chapters of the book are also worth mentioning. In one, Friedman (who is Jewish) describes the highly unusual circumstances of Freemasonry as it is practiced in the troubled nation of Lebanon. He delves deeply into the tumultuous history of that country, and explores its remarkably diverse ethnic and religious society, along with the highly secretive nature of belonging to a Masonic lodge in the nation that is the legendary home of major figures in our ritual. The other chapter is Samuel’s personal vision of his utopian Masonic lodge. While not everyone will agree with his ultimate wish list, he certainly provides a different way of looking at lodge practices that might be considered. The U.S. has literally thousands of individual Masonic laboratories for us to experiment in, as long as we stay within the boundaries of our rules and rituals. So, read it with an open mind. You might find something worth trying in your own lodge.

His book is not long – just 135 pages – and you can easily finish it in a couple of hours. But especially if you are in a position of lodge or grand lodge leadership, I highly encourage you to read it. You may agree with some of his observations and vision of Masonry’s future, or you may strongly disagree, but I urge you not to simply dismiss it out of hand. The millennials have been joining our lodges for the last several years, and many, many more are on the way. We ignore their opinions and desires at our peril. If lodges fail to adapt to their social and philosophical attitudes, these men will either charter new ones, or simply walk away. As leaders, the choice is ours.