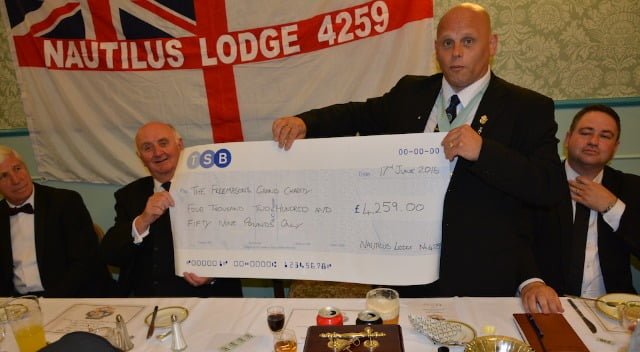 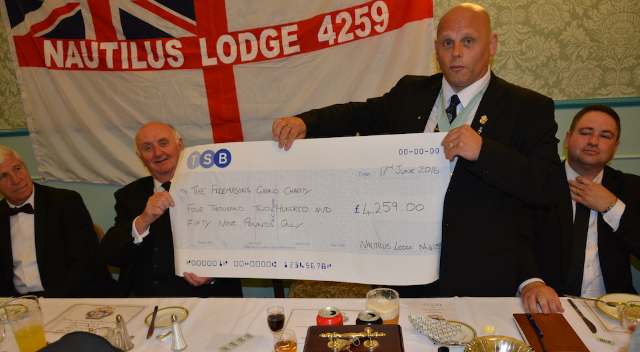 Once a year the brethren of Nautilus Lodge in Sunderland celebrate the last meeting before the summer recess, with a Nautical Night.  The evening is a celebration of all things Nautical and is also open to non-masons.  This offers a fantastic opportunity for non-masons to go inside a full lodge room, to see a lecture and then, retire to the festive board for the famous gastronomical delights of the Nautilus Pie as well as the renowned Nautilus hospitality, harmony and friendship.

On this special Nautical Night the Provincial Grand Master, Norman Eric Heaviside and, a Deputation of Provincial Officers joined the Nautilus brethren.

The first business of the evening for Eric, was the presentation of a Silver Lapel Badge to Ian Wardle, the lodge’s Charity Steward, in recognition of the lodge reaching 66% of the lodges Festival target.  Eric praised Ian’s fantastic work in the Lodge and informed the brethren that, as of today the fund has £933,500 cash in the bank; a fantastic total in such a relatively short time.

The lodge was opened in The Nautical Workings, which is a unique homage to the seafaring traditions of Nautilus Lodge.  The non-masonic guests were then welcomed into the lodge room for the 5th Annual Nautical Lecture which was presented by Anthony Renton, entitled “Lightship No.72, a Suitable Case for Preservation”.

Some younger brethren may not know or, be aware, of the rich Maritime history which makes up the DNA of Sunderland.  At one time, Sunderland was dubbed “the largest shipbuilding town in the world” with shipbuilding dating back to 1346, when Thomas Menvill had a shipbuilding yard in Hendon.

Throughout its history Sunderland has had over 400 registered shipyards.  Some notable events in that time including, the Nationalisation of the industry in 1977 with 7,535 people working in the yards.  The last two remaining shipyards merged in 1980 and finally the last remaining yard closed on 7 December 1988.

One of the last remaining Sunderland built surviving ships in the world, Lightship72, was highlighted and, with a fair wind and some public donations, it is planned to return the vessel back home to Sunderland.

Martin Telfer then presented Eric with a donation for £4,259 for the 2021 Festival. Eric thanked the brethren of lodge for this very generous donation, as well as thanking them for matching the Lodge’s number 4259 in cash.

At the festive board the famous Nautilus Pie was the main talking point of the evening. As the kitchens were out of service at Queen Street due to a flood, Gavin Leng stepped up to the mark and delivered a first class meal that was a credit to him and his staff at Martinos Restaurant.

The presentations continued at the festive board with Eric making a special presentation to Gavin Leng for his donation of the winnings from the Strictly Sunderland 2016 to the 2021 Festival.

Martin Telfer then presented Eric with a signed print of Micky Horswill in the 1973 FA Cup final.  Micky signed 2 prints at his talk at the festive board, earlier in the year at Nautilus Lodge.  The prints were donated by Rod Scott with £95 raised on the night for the second print.  Continuing on the Sunderland 1973 front, Jim Montgomery, as a guest of Martin’s, signed a programme from his 1974 Testimonial Match Programme and Martin also presented this to Eric.

Andrew Foster, on his last working night as the Provincial Director of Ceremonies, was presented with a bottle of malt whisky in thanks for his work during the evening.  The warmth of the brethrens’ response to him was testament to the respect and standing he has in the Province both as a mason and a gentleman.

The Nautical theme continued with harmony by Ian Campbell, reflecting a range of sea shanties and Irish staples which brought another Nautical Evening to a close, with all hands agreeing everything was Sea Shape and Bristol fashion at Nautilus Lodge. 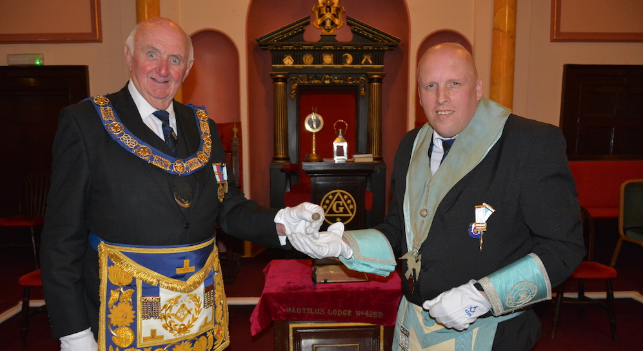