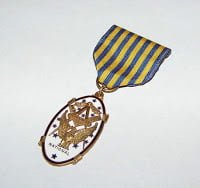 The National Sojourners have just made an important change to their bylaws concerning membership eligibility.

The  resolution passed with nine votes more than the 75% required for the change. It reads in part:

Whereas we believe that the Purposes of National Sojourners shall be to organize Master Masons who have honorably served their country as part of the uniformed Services, and other Master Masons as honorary members, into Chapters for the promotion of good fellowship among its members, for assisting such as may be overtaken by adversity or affliction, for cultivating Masonic ideals, for supporting all patriotic aims and activities in Masonry, for developing true patriotism and Americanism throughout the Nation, for bringing together representatives of the uniformed forces of the United States (past and present) in a united effort to further military need of national defense, and for opposing any influence whatsoever calculated to weaken the national security…

Therefore, be it resolved that paragraph 3.1.1 of Article 3, National Bylaws, and National Regulations 3.1 be changed, amended, or administratively conformed to permit all recognized Master Masons currently in active military service or have in the past served and is now listed as honorably discharged or retired under such honorable status, to petition for active membership; and permit current members of National Sojourners Inc., who are in the same category and are carried on National Sojourner rolls as Honorary members, to elect conversion to active membership status.

What makes this change so important has to do with the way the organization was originally formed, and by whom.

Early in 1900, after the North Dakota Regiment departed the Philippines with its Field Lodge dispensation, a group of military Masons organized an informal club and named it “Sojourners.” Most of the Philippine Sojourners eventually became scattered throughout the United States.

In 1917, some of the officers who were members of the club gathered together in Chicago to make the organization strictly for Commissioned Officers, and formally organized the “Chicago Sojourners Club.” When their membership began to shrink over time, the club decided to also admit Warrant Officers, and then Senior Non-Commission Officers (Rank E-7 and above).

In 1931, they officially chartered the National Sojourners as a nationwide organization. While it was indeed designed as a Masonic group, “Active” membership status remained restricted to Commissioned Officers, Warrant Officers, and Senior Non-Coms who were Master Masons. Other military Masons below these ranks were relegated to Honorary membership. These rules offended many brethren who felt that the rules of the organization did not place them “on the level,” and inferred that their service to the nation was not as important as others.

Although the only true difference between “Active Member” and “Honorable Member” was that Honorary members could not become national officers in the organization, many veterans felt the difference to be far more significant, especially considering that a 2nd Lieutenant or Ensign, after one day of being a commissioned officer was considered by the rules to be more eligible for leadership than a Staff Sergeant or Petty Officer with 10 to 15 years of experience. But remember that in the past, there were also serious military rules about officers fraternizing with enlisted men, and this may have been part of the problem. For Masons, that justification was hard to swallow, considering Lodge membership rules and that Masons came from all ranks and services.

Because of this, about ten years ago, a movement within the organization developed to change the national bylaws to make Active status available to all who are serving, or have served honorably, in the Uniformed Services of the United States, and Honorary status for those Master Masons who have not served. While some saw this as a means to simply get in more members, many more saw it as a way for the organization to get back to its roots of bringing all military Master Masons back on the level.

Their renewed purpose is for the “promotion of good fellowship among its members, for assisting such as may be overtaken by adversity or affliction, for cultivating Masonic ideals, for supporting all patriotic aims and activities in Masonry, for developing true Patriotism and Americanism throughout the Nation, for bringing together representatives of the uniformed forces of the United States (past and present) in a united effort to further the military need of National Defense, and for opposing any influence whatsoever calculated to weaken the National Security.”
Today, the NS provides public programs about the flag and patriotism, youth leadership programs, a national essay contest, and ROTC/JROTC awards. They also perform an inspirational period degree for Masons called the Heroes of ’76. The Collingwood Library and Museum on Americanism in Virginia is the headquarters of the National Sojourners and is located on property that was once part of George Washington’s river farm.
To find a local Chapter or for more detailed membership information, see the National Sojourners website HERE.