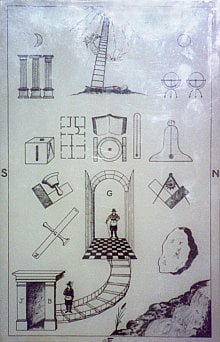 During the period known at the Napoleonic wars (1793 circa 1814) there were up to 122,000 enemy sailors and soldiers held in captivity. The officers were held in 50 parole towns from Abergaveny, Bishop’s Castle through to Wincanton. The bulk of the prisoners were held in rotten hulks on the rivers around the UK as well as in the city goals.

There were between 200-300 prisoners per town, and before any officer was allowed to reside in a parole town he was required to sign a document promising to observe certain rules. Having done this he was said to be “on parole.”

This took the following form:
whereas the commissioners for conducting His Majesty’s transport service and for the care and custody of French officers and Sailors detained in England have been pleased to grant…leave to reside in…upon condition that he gives his parole of honour not to withdraw one mile from the boundaries prescribed there without leave for that purpose from the said Commissioners, that he will behave himself decently and with due regard to the laws of the kingdom, and that he will not directly or indirectly hold any correspondence with France during his continuance in England, but by such letter or letters as shall be shown to the agent of the said commissioners under whose care he is or may be in order to their being read and approved by the superiors, he does hereby declare that having given his parole we will keep it inviolably.

In all parole towns the following notice was posted in prominent positions.

Notice is hereby given

That all such prisoners of war are permitted to walk or ride on the great turnpike road within the distance of one mile from the extreme parts of the town (not beyond the bounds of the parish) and if they shall exceed such limits or go into any field or cross-road they may be taken up and sent to prison, and a reward of ten shillings will be paid by the agent for the apprehending them. And further that such prisoners are to be in their lodgings by 5 o’clock in the winter and 8 in the summer months, and if they stay out later they are liable to be taken up and sent to the agent for such misconduct.

However, during 1810-1812 some 462 officers broke their parole and escaped to France, and of these, 310 escaped in one year (1812), but abroad not one British Freemason officer had broken his parole. However, the French prisoners were held in ‘open prisons’ whereas the British were held mainly in fortresses and secure castles, and therefore not readily having of an opportunity to decamp. The French authorities did not contribute to the keeping of their prisoners, whilst the British gave each French officer half a guinea per week for sustenance, also being on parole they were free to find employment locally if they could.

There was even an instance where the officers became far too successful in business, whereby they were banned from lace making, as it was affecting the local trade! However, the lot of those held in prisons such as Bristol, Norman Cross or Dartmoor were much less convivial. Many thousands of French and indeed American POWs from the War of Independence died from starvation or prison fever.

The French army, just like the British, had a long tradition of having travelling Lodges attached to their military. The first Lodge in the French army was La Parfait, constituted in 1759. So it is not surprising that Lodges sprang up in most of the 50 cantonments in the UK.

The French rule was that seven Master Masons could form a Lodge in a town where there was no Lodge, and they became “loge en instance”. In at least four cases, the French applied to Lord Moira, Grand Master of the Ancients Grand Lodge, to hold meetings.

They were held under the provision of the Antients and in association with the Grand Orient of France. The Lodge permit for Des Vrais Amis de l’Odre Ashby-de-la- Zouch is still extant. The brethren of Royal Sussex Lodge No. 353 bought the lodge furniture from the French prisoners. Still on view in the Burton Masonic hall are the floor cloths and furniture bought from the French Lodges before their repatriation.

The French Lodges had names which reflected their circumstances, among them De l’Esperiance (hope), De l’infortunes (the unfortunate ones) and De la Paix Desiree (hope for peace).
Lodges were not only accessible in the parole towns. In Portsmouth, for example, upon the prison ship the Guildford, a Monsieur A. Lardier wrote in his book Historie des Pontons of a Lodge held in the hull of the ship in such a confined space that, although he was “less than the ordinary stature of ordinary men we were obliged to bend almost double, so limited was the space.”

He added: “The Master of the Lodge, who was as Sovereign Prince Rose Croix, presided from a rickety three-legged bench which he struggled throughout the ceremony to keep stable. The remainder of the brethren were obliged to sit upon the floor ‘in the manner of Turks or Tailors’.” The floor work must have been particularly impressive, for this was not an occasional Lodge, but one of a regular programme of meetings held by our zealous French brothers.

The Freemasons of Poole raised funds to assist British prisoners of war in France and even entertained a French prisoner brother. One Englishman captured by the French, on discovering that he was a fellow Mason, had him billeted with brothers in Verdun. During his captivity, which lasted from 1803 to 1814, Napoleon personally provided

Christmas dinner for the English Freemasons.

Then there is the story of the ‘amity’ biscuit. A Captain Jacques le Bon captured the brig Oak in 1813, and upon discovering that the captain was a fellow Mason, released him. Not only that, he also presented him with a small dog which had been owned by an English Mason who had been recently captured.

The dog had a biscuit suspended around its neck. Captain le Bon stated that he would not even keep a brother’s dog in captivity, nor would he see it want for food. The biscuit, mounted and framed, is the prize possession of Lodge of Amity No. 137 at Poole.

There are numerous memories of the French brethren still visible in England, ranging from Lodge furniture, Masonic artefacts in museums, through to grave stones in English churchyards, memorials to French brothers who had given their Parole – their Word.