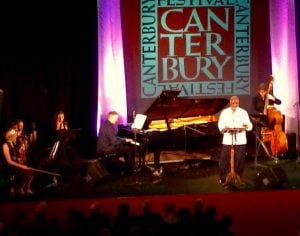 MUSICAL MEMORIES: From the Canterbury Festival 6 years ago.

This article was submitted by Tony Eldridge, Secretary and one of the Founding Members of the Sir Edward Elgar Lodge No 9837.

Sir Willard White at the Canterbury Festival in 2010

“Several members of Sir Edward Elgar Lodge and their partners, were privileged to witness a landmark musical experience in the magnificent Shirley Hall, Canterbury, in the shadow of the Cathedral, when a world renowned singer came to the city. The power of music to capture the attention and to influence lives never ceases to amaze.  Jamaican born bass-baritone Sir Willard White, singing a tribute to Paul Robeson, was a never-to-be-forgotten experience in music and words.  I met Robeson’s grandson a few years ago: “in him, there were many signs of the great man’s indomitable spirit and integrity”.

A hero for social justice in the 20th century, Paul Robeson was son of a slave turned pastor and, whilst studying for a law degree, mastered football, basketball and athletics – singing his way through university to support his education.  His magnificent bass voice was loved by all.  Touring the world (he was fluent in several languages, including Russian) using the concert platform, he hit the headlines as an artist of the highest quality, whilst speaking out for the working man, the oppressed and for the anti-fascist cause.

One of his famous roles, “Joe” in the London production of Showboat at the Theatre Royal, Drury Lane – just a stone’s throw from Freemasons’ Hall – made “Ol’ Man River” an enduring favourite. He lived in Britain for many years, and in the 1950s played Othello for the Royal Shakespeare Company. Enthusiastic worldwide celebrations for his 70th birthday included concerts at the Royal Festival Hall and Carnegie Hall New York.  Singing the “Spirituals”, inspirational songs of sorrow with hope, were always part of his life – and Willard White’s performances 30 years after Paul Robeson’s passing, continue this tradition, in true homage to Robeson but with a bass voice of equal magic and power.

The measure of the man resonating down the years, the need to continue to speak out against injustice whilst anchored in faith; Robeson’s example, like his rich and powerful bass voice, must never be forgotten.”

This year’s festival starts again soon on 15th October. Despite the difficulty in getting this world-famous singer to appear due to his busy diary, Willard White performs again, this time at the Colyer-Fergusson Hall, University of Kent at Canterbury on 25th November 2016.