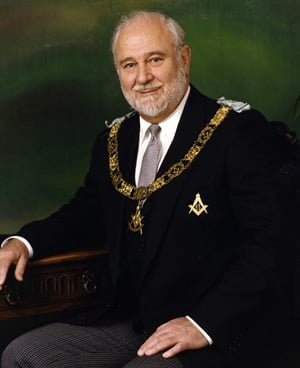 It is with great sadness that we record the passing of Most Worshipful Brother Darwin H.Templeton, C.B.E., F.C.A. Grand Master of The Grand Lodge of Ancient Free & Accepted Masons of Ireland from 1991 to 2001. He had served as Deputy to Most Wor Brother Dermot 7th Marquis of Donegal L.V.O., and in due course was followed as Grand Master by Most Wor Bro Eric N. Waller in 2002. Darwin was born in 1922, trained as an accountant, became a venture capitalist, and was actively involved in a large number of private businesses and semi state bodies throughout the island of Ireland. He served as President of The Chartered Accountants of Ireland in the years 1970-71.

But his first love was Freemasonry, and from his home outside Broughshane, he would become intimately involved in the growth and development of Irish Freemasonry. As an accountant, his first major post in the Craft was to serve as the Right Worshipful Grand Treasurer of The Grand Lodge of Ireland, In 1983 he was elected to serve as Assistant Grand Master,before progressing to the post of Deputy Grand Master in 1989. Then in 1991 he became Grand Master, when Most Wor Bro, The Marquis of Donegal stepped to the side, and became the first Past Grand Master in modern years. In the previous 200 years, most Grand Master’s died in office, so this was an important milestone in the history of Irish Freemasonry.

Darwin was only the second Grand Master originating within the Province of Antrim. Back in the late 18th century Randal William MacDonnell, Viscount Dunluce ( afterwards the Marquess of Antrim ) served two terms as Grand Master of Ireland in the years 1772-73 and 1778-81. He also served as Grand Master of The Grand Lodge of the Antients in London, when his Grand Secretary, at that time was none other than Lawrence Dermott Esq.

Darwin was a strong supporter of Rt Wor Bro Robert L. Orr Provincial Grand Master of Antrim in the late 1980’s and early 1990’s. Rt Wor Bro Orr came up with an initiative known as The Young Master Masons of Antrim, a group of Young Brethren, not yet Past the Chair, but selected, for their interest and enthusiasm, and directed to carry out a wide ranging study of how Craft Lodges operated within the Province, and how, if at all, they could be improved to encourage new Membership and retain existing members, once they had passed the Chair. An intense period of Lodge visits took place and a major report, known as The Younger Master Masons of Antrim report was prepared and submitted to Provincial Grand Lodge of Antrim and The Grand Lodge of Ireland. Provincial Grand Lodge implemented a number of the report’s recommendations right away, and in the longer term, thanks to the careful support from Most Wor Bro Templeton, Grand Lodge adopted most of the rest of these recommendations, which it duly published under the title of The Way Forward document. Thanks to the close friendship between Darwin and Lord Farnham, Pro Grand Master of The United Grand Lodge of England, the outcome of this report was widely disseminated around all three of the Home Constitutions.

Darwin’s period as Grand Master was also notable for the various trips carried out by our Most Wor Grand Master and his Grand Secretary – Rt Wor Bro Michael Walker, as they visited our many overseas Lodges and Provinces. In 1995,on the 4th February they constituted The Provincial Grand Lodge of Jamaica, and invested Rt Wor Bro James Seiuright Moss-Solomon to be our First Provincial Grand Master in Jamiaca. In total there were some 5 Lodges under the control of our new Provincial Grand Master. In April 1996, they were off again, this time to Hongcong to Constitute Baden Powell Lodge No 929 I.C., on the roll of The Grand Lodge of Ireland. Darwin was a firm believer in involving all of our membership in our Masonic activities, and to that end he organised the first Grand Master’s Festival, specifically established to raise funds for non Masonic Charities. It this he was very successful both in getting Lodges and their members raising large sums of money, and in raising awareness throughout the Island of Ireland and further afield of the existence of Irish Freemasonry and its benefits to the populous at large. This first Festival, concluded with a Dinner and Show in the First Floor Dining Room of the Belfast City Hall.

Brethren, our late Most Wor Brother, brought me into Grand Lodge Masonry with his invitation to serve as his personal Standard Bearer. He was a man of
great ability, enthusiasm, a leader amongst men, who was universally liked by our membership around the globe. In later years he has not enjoyed the best of health, but during his time in Office, he made a difference. And in the end Brethren, this is all that any of us can hope to do. These brief words would not be complete without noting his mantra – Apart of Society, not apart from Society.

Our prayers and sympathy go out to his wife Pat and the rest of his extended family circle, at this difficult time. The interment will take place in Broughshane Presbyterian Graveyard on Friday the 4th November after a memorial service in West Church, Ballymena, which will commence at Noon.