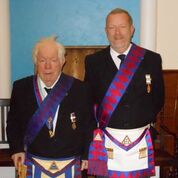 Seldom does a father have the opportunity to be part of the exaltation of his son in Royal Arch Masonry but two such occasions occurred on consecutive nights recently when Ex Comp Tom Emmerson exalted his son Paul, the current Senior Warden of  Elmley Castle Lodge, into Avon Chapter on Wednesday 22nd April and on the following evening Ex Comp Richard Harper obligated his son Jason, a member of Chipping Campden Lodge, during his exaltation in Abbot Lichfield Chapter.

Young Tommy Emmerson (90) did a tremendous job in Avon Chapter and Paul can be proud of Dad. In Abbot Lichfield Chapter Jason Harper,  currently Junior Deacon in his Craft Lodge, was obligated by Dad Richard during a double exaltation in which the first part of the Mystical Lecture was presented by Tommy Emmerson following which Ex Comp Bob Major completed the exaltation, the work of both was of an excellent standard. 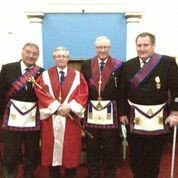 Ross. 35 Companions attended the double exaltation and Tommy is now reported as “taking a well-earned rest”  in Chapter, at least until the June installation ceremony for Avon Chapter.

The election of the Three Principals for the ensuing year took place and Ex Comp Mike Dykes, Ex Comp Paul Taylor and Comp Derrick Blake were elected. They have a busy year ahead with two exaltations already programmed in the schedule of meetings.