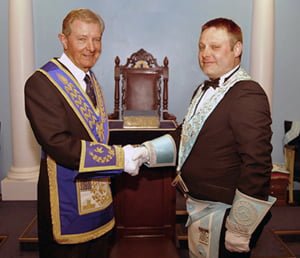 The brethren and guests of Lever Park Lodge No 8144 gathered to celebrate the installation of Mathew Farnell into the chair of King Solomon and were greatly honoured by the presence of grand officer Stuart Thornber representing the Provincial Grand Master Tony Harrison.

Stuart was accompanied by the Chorley Group Vice Chairman Peter Allen and group treasurer Joe Hall, as well as a host of acting Provincial grand officers.

The installation ceremony was shared between the outgoing worshipful master Peter Hannis and his immediate past master Derek English, both of whom delivered their parts in an exceptional manner, giving the outgoing director of ceremonies Stanley Wood an easy night.

Both addresses to the master and the wardens were presented by John Ball and were word perfect and finally the address to the brethren was given by Stuart Thornber.

Lever Park Lodge is one which has many junior ‘light blue’ members whom they believe in putting to work and this evening was no exception with the working tools in the three degrees being presented by; Gary Mathews (third degree), Robert Tinsley, a fellow craft presenting those of the second degree and Clive Butterworth those of the first, all of which were presented in a very confident and sincere way. 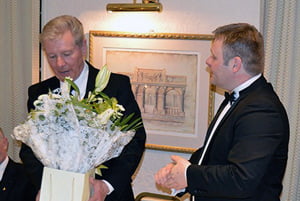 Mathew presents Stuart with a during the festive board.

As is traditional on such occasions, Stuart brought greetings and best wishes from the Provincial Grand Master who wished all those in the lodge health, strength and happiness.

In reply Mathew thanked Stuart for his kind words and went on to present him with charity donations consisting of four cheques: £300 to the Masonic Charitable Foundation, £150 to the Horwich Masonic Hall, and two £100 donations to non-Masonic charities and good causes; totalling a very generous £650.

The usual ‘Lever Park’ festive board followed, consisting of fine fare, in a warm and relaxed atmosphere and the friendly and spirited manner in which the members and visitors of Lever Park Lodge enjoy themselves on these occasions?