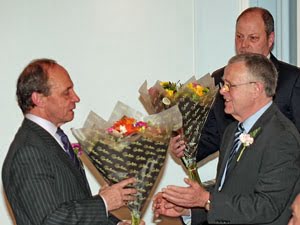 Southport Group Masters and First Principals’ Festival was this year honoured by the presence of Peter Taylor, Provincial Grand Secretary. The hall chef, Wayne Warhurst and his team presented the guests during the evening with a delicious meal including home-made pate with French toast followed by roast pork with stuffing and seasonal vegetables.

Colin Jenkins (right) presenting a bouquet to Peter at the conclusion of an extremely enjoyable evening.

Stephen Devey, WM of Rose of Lancaster Lodge No 2325, delivered the toast to the principal guest in an excellent manner. In reply, Peter reminded all that they were part of the largest group in the largest province in Freemasonry in the world. He also congratulated the group for its sterling work with the Three Degrees Club, now containing over 75 members and its involvement in the now burgeoning Light Blue Clubs around Britain. He reminded everyone that the Three Degrees Club was, indeed, one of the very first in the country.

Peter went on to congratulate Paul Renton for his promotion to Second Provincial Grand Principal and Mark Barton for his re-appointment as Provincial Deputy Grand Director of Ceremonies. Praise also went to Assistant Provincial Grand Master Robert Wright, who has been awarded the very distinguished office of acting Senior Grand Deacon. Peter concluded by proposing a toast to the group chairman Colin Jenkins.

Colin in his reply also congratulated the recent promotions as well as giving a brief report of all the activities that now occur within the group and the hall, both for brethren and their families, as well as the community at large. Thanks were given to all the staff who work at the hall and brethren who have worked so hard to make the evening such a success. Colin then announced that it was time to receive the traditional charity donations from the various societies within the group.

A magnificent total of £20,790.50 was raised this year and the donations were as follows: Paul Kevan presented £600 on behalf of the Discussion Group for the purchase of a new Royal Arch carpet.  Peter Martin presented a cheque for £500 for the Foundation on behalf of Bury Road Garages. Doug Drysdale presented £1,255 from Perfect Ashlar Lodge No 5246 for Computer Initiative for Breast Cancer. Maurice Evans, on behalf of the Southport Group donated £2,300; this was shared;  £1,000 for the Masonic Hall Foundation, £1,000 West Lancashire Freemasons’ Charity and £300 to Zoe’s Place Children’s Hospice. Michael Cox presented £500 from his 60th jubilee celebrations to the British Lung Foundation. Bryan Henshaw and Tom Bradfield-Kay, on behalf of MAGIC, presented £500 to Queenscourt Hospice, £500 to ELESMA, £500 to the WLFC, £500 to the Hall Foundation, £300 to the Grand Lodge Tercentenary Fund and £200 to Southport Offshore Rescue. The Computer Society donated £50 to the Hall Foundation. The Friends of Tithebarn also donated a magnificent £2,150.

This completed a most enjoyable evening with plenty to talk about and much to look forward to in the future.

Pictured left: Colin Jenkins (left) being presented with a donation by Alan Sainter, watched by his son Alister, from his Regalia Agency. Pictured right: some of the 96 brethren and companions who attended the dinner.