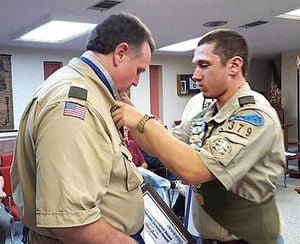 Brother David Gambrel has been a Master Mason since 1984. During that time he has served twice as Master of both Lincoln Lodge No. 60 and Waynesburg Lodge No. 328. He has held every office in the local blue lodge with the exception of Treasurer and Junior Steward. He is currently Senior Warden of Lincoln No. 60 and will be Chaplain in 2016.

Brother Gambrel’s Scouting career began as a Cub Scout and in 1979 he became the only Eagle Scout for Troop 91 in Kings Mountain, Kentucky. As an adult he has had more than 20 years of service and has held numerous positions in the scouting program including Scoutmaster, Cub Master, Assistant Scoutmaster, Den Leader, Committee Member, Assistant District Commissioner, Chartered Organization Representative and is currently Committee Chair for Troop 379 in Eubank. His son John recently joined him as an Eagle Scout making them the only father and son Eagle Scouts in the history of Lincoln County.

During his time as a Mason Brother Gambrel has worked diligently to foster a relationship between the Masonic Lodge and the Boy Scouts. This has included Waynesburg Masonic Lodge No. 328 being the charter partner for Cub Pack 328, which produced three young men who earned the Arrow of Light.

He also provided the research and guidance for two Eagle Scout Service projects that involved extensive restoration of the headstones of Masonic Civil War veterans at both the Crab Orchard and Double Springs cemeteries. These projects included documentation of the soldiers’ stories along with producing a map showing the location of the graves. In addition a QR code is on the map enabling individuals to take a self guided tour at any time and listen to the soldiers’ stories.

The projects also included restoration of the stones of non combatants such as W.T. Humber of Crab Orchard whose stone had been broken into four pieces. Brother Humber had two brothers serve in the Confederate Army both of whom were also Freemasons. Brother Gambrel also worked to secure a VA marker for Brother Carroll Cole  Humber, the youngest of the three Humber brothers. Prior to Brother Gambrel’s efforts Caroll Cole Humber’s grave was unmarked. The Crab Orchard project also included the restoration of  Brother Harbert King, Jr.’s stone. Bro. King was a member of Spring Hill Masonic Lodge and was Captain in the Union Infantry. He lost his life in the war along with two of his sons. Brother King’s father, Harbert King Sr. was a pioneer of Freemasonry in Lincoln County. He served as the first Master of Lincoln Lodge No. 60 when it was established in 1820.  The Crab Orchard project resulted in Dakota Martin earning the rank of Eagle Scout as a member of Troop 148 in Stanford.

The Double Springs project included the repair and restoration of the headstone of Brother Henry Caldwell of Waynesburg. In the 160-year history of Waynesburg No. 328, a member of Brother Caldwell’s family has held at least one office for 99 of those years.

Although Brother Caldwell was himself not a soldier, he became the caretaker for  Civil War veteran Virginius S. Denson, who served under George Pickett, and was in the famous Pickett’s Charge at Gettysburg. The Caldwell family provided the burial plot for Denson. Brother Gambrel used the restoration of the Denson’s stone as an opportunity to share with the Boy Scouts the story of the encounter that resulted in the Friend to Friend Memorial at Gettysburg.

The Double Springs project enabled Kenneth Brandon May, the great-great-great grandson of Brother Caldwell, to earn his Eagle Scout rank as a member of Troop 379 Eubank.

It is with great pride we submit the name of Brother David Gambrel for the Dan Beard Award.