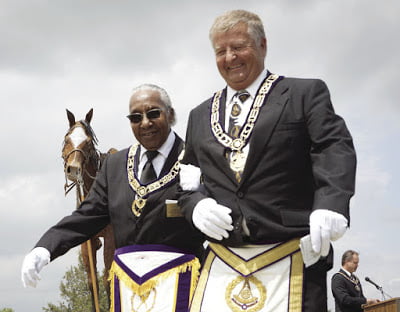 Historic Ft. Buford in North Dakota is located at the confluence of the Yellowstone and Missouri rivers. Lewis and Clark camped here in their exploration of the West. And it was here that Sitting Bull and his decimated Sioux followers surrendered in 1881. The fort itself closed in 1895, and is partially restored and run as an historic site by the North Dakota State Historical Society.

The first Masonic charter issued to Prince Hall Masons in North Dakota was carried by the Buffalo Soldiers of the 25th Infantry, in 1892. The 25th Infantry was one of just four all-black units in the U.S. military at that time. Eureka Lodge No. 135 PHA was chartered as a military lodge by the Most Worshipful Prince Hall Grand Lodge of Missouri when the soldiers were stationed at Ft. Apache in the Arizona Territory in 1891.

On Saturday, Masons of North Dakota, Minnesota, Missouri, and other visitors assembled at Ft. Buford to unveil a monument dedicated to the Buffalo Soldiers.

The site at Fort Buford is owned by the Grand Lodge Foundation. On this location, two Masonic Lodges were once utilized. The Buffalo Soldier Units began their residence at Fort Buford in 1891, and the Eureka Lodge No. 135 was chartered in that same year. At that point in time, the two Masonic lodges located at Fort Buford where segregated by race… This mirrors the 9th Cavalry very closely. The 9th Cavalry was dubbed ‘The Buffalo Soldiers’ and continued to be racially segregated during World War II.

The tie between the Masons and the Buffalo Soldiers at Fort Buford is rooted back in the 1890’s but extends to present day. Charles Snargrass is a prime example of this. Snargrass, a 93 year-old veteran of the 9th Cavalry and Grand Secretary of the Prince Hall Masonic Lodge in Minnesota, was present and participated in the ceremony on Saturday.

Snargrass served in the Cavalry during World War II and could identify the historical accuracies which the artist of the monument portrayed.

“It’s very impressive,” Snargrass said. “It’s unbelievable that his imagination went that far. He got all the details. With the halter around his neck and the reins. We didn’t tie the horses by the reigns. We used the rope that was around their neck. That’s what we would tie them around the posts with.”

He could see the connection between the Masons and the Buffalo Soldiers easily. Not only by being the living, breathing, example of this, he felt that history was the tie that binds.

“When this lodge [Eureka Lodge] was first chartered in North Dakota, the Buffalo Soldiers delivered them their first charter,” Snargrass said. “That person from the 9th Cavalry was the first Grand Master that this lodge had. It gives it a lot of background and a lot of heritage.”

The Monument itself was designed and built by Bozeman artist Jim Dolan and named ‘Our Work Is Done’. Masked in a white canvas sheet until the unveiling, it stood at an impressive height. 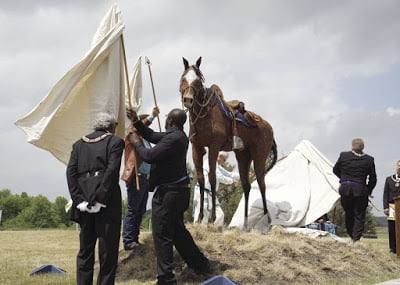 The statue is a athletic looking horse with all the trappings of a Cavalry soldier. It took Dolan 6 months to complete his work. “I pretty much worked straight through,” Dolan said. “I finished on Monday, and we brought it here on Tuesday.”

According to Jim Salvoija, Past Grand Master for North Dakota and state historian for the Masons, the statue was bought and paid for by a singular individual. “We had a benefactor that came into the picture and actually supplied the monument,” Salvoija said. “It’s an undisclosed source. It’s an individual that wasn’t a Mason but now is. He became so involved in the history and the real story of what it is.”

From as far away as Missouri, Minneapolis, and Minot, Masons came from across the country to witness the dedication. The connection to the state of Missouri is that the Eureka Lodge was chartered by what is now known as the Prince Hall Grand Lodge of Missouri. Ed Johnson is a Past Grand Master Mason who made the hike from the ‘Show-Me State’.

(Article and photos by Alexa Althoff)