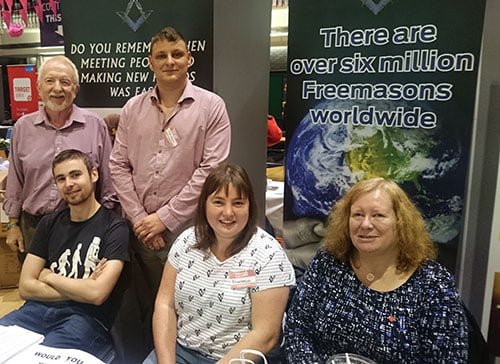 As one of the two lodges within the Province that are members of the Universities’ Scheme, members of the City of Lancaster Lodge No 281, recently attended the ‘Fresher’s Fair’ at Lancaster University. This was one of the days when students new to University life were afforded the chance to see what awaited them in their new academic home – Lancaster and the overwhelming social choices on offer with representatives from a tantalizing array of societies and clubs all competing for their attention.

In normal circumstances David Grainger, the APrGM with responsibility for the University Scheme, would have led the group but due to sickness, it was left to the Lancaster and District Group Universities’ Scheme Co-ordinator John Stanley to be the driving force for this event. His team of volunteers were very ably assisted by drawing on the expertise of his good friend John Lee the current Provincial Senior Grand Warden. John is a leading member of the ‘Fylde Light Blues’, a group which organizes events to assist young Masons to connect with each other and other brethren in the fraternity on the Fylde; much as the ‘Three Columns Club’ does in the Lancaster area.

Bernard Snape, Lancaster and District Group Membership Officer and prominent light-blue from City of Lancaster Lodge Graham Rotherham, proved to be the ever-present key workers in a team of seven which manned the stall throughout the day. Other brethren from City of Lancaster Lodge, namely Ed Moore and Josh Sendall, as well as university employee Trevor Duncan from Poulton le Sands Lodge No 1051, assisted valuably at various points in the five-hour slot. It is estimated that around 3,500 students passed through the Great Hall of the university prior to the start of term, to sample the mix of delights from retailers such as Wilko’s, Domino’s and Greggs; as well as being welcomed by representatives from nightclubs, health clubs, churches and sports shops!

Pictured from left to right are: Bernard Snape, Ed Moore (seated), Graham Rotherham, Laura Aimson and Brenda Dobson waiting for the doors to open and students to be admitted.

The City of Lancaster team worked alongside local representatives of The Order of Women Freemasons, Laura Aimson and Brenda Dobson in what was a highly successful occasion and a day of cordial co-operation for both spheres of the Masonic Order. Indeed, they have decided to repeat the attendance at Freshers Week again in 2017.

Bernard and Graham reported that they had obtained a good number of definite enquiries on the day from both students and staff at the university. These enquiries would be followed up with an invitation to visit Lancaster Masonic Hall on a future date, for a guided tour and the opportunity to ask further questions. Scheme co-ordinator John Stanley commented: “We handed-out over 500 printed flyers specifically about City of Lancaster Lodge, gave out over 300 of the UGLE booklets ‘What is Freemasonry’ and also almost 100 DVDs about Freemasonry.” He continued: “The team distributed 1,000 specially designed beer mats which advertise City of Lancaster Lodge, these items are an essential part of a new student’s inventory!  We are confident that will see further interest and enquiries generated by these in the coming weeks or months.” He concluded by observing that the level of interest shown and the response had been fantastic, with their expectations greatly exceeded.

On later learning of the success of the day, David Grainger said: ”I am delighted and proud of the efforts of the team that took part in such a successful presentation of the Masonic message to many of the 1,000s of young students that attended the Fair.” In summary, he remarked: ”We will have to wait and see how many of the students take the opportunity to get further information about Masonry, but the efforts of John and his team have ensured that a lot of bright young men are now far better informed of our institution, our principles and tenets.”

The crowded Great Hall, proves the popularity and success of the day!