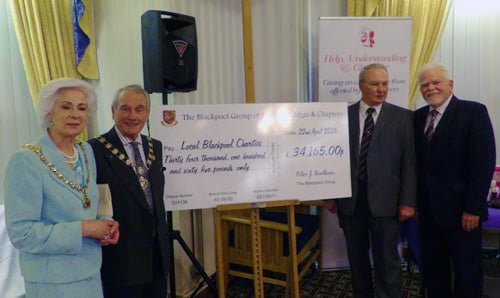 Almost £61,000 was donated to charity by Blackpool Freemasons at their annual Charity Giving Night at Blackpool Masonic Hall, Adelaide Street, of which more than £34,000 was distributed to local Blackpool charities. 35 local charity groups benefited from varying donations, the largest individual sum being presented to Trinity Hospice and its children’s wing Brian House.

On receiving a cheque for £7,025, chief executive of the hospice David Houston commented: “Many people are aware of the difficulties faced by charities during these austere times and the generosity of the Freemasons is hugely appreciated. It is a major struggle to fund the invaluable work that the hospice provides when government grants represent less than 20% of our required budget. Freemasonry continues to support all hospices throughout the country, as it has done for many years and we are deeply appreciative of its help.”

Principal guests in attendance on the evening were the Deputy Mayor of Blackpool Councillor Tony Brown and Deputy Mayoress Mrs Angela Brown. Tony, in summing up on the events of the evening modestly admitted: “Before I attended, I knew nothing of Freemasonry and its charitable work. This evening has opened my eyes to the tremendous work that the fraternity does.”

Following free refreshments and biscuits courtesy of the Masonic hall’s caterers Dahlia’s Kitchen, Chairman of Blackpool Group Peter Bentham welcomed over 100 guests to the event and many of the charities to benefit from donations were there to express their thanks and provide a short explanation of the nature and roles of their organisations.

Pictured left: Joe Codling, WM of Blackpool Lodge of Integrity No 5864 (right) presents a cheque to the Blackpool Carers Centre. Pictured right: Sarah Horne (centre) receives a donation for NW Air Ambulance from Phil Houldsworth of Blackpool Lodge of Fellowship No 7692 (left) and John Brumfield of Mereside Lodge No 6360 (right).

One such grateful recipient was NW Air Ambulance volunteer worker Sarah Horne who commented: “Like many charities, we rely completely on the generosity of the public to keep our service operating 365 days of the year.” Sarah became a volunteer worker for NW Air Ambulance some years ago after her husband had been involved in a horrific road traffic accident to which the NW Air Ambulance were immediately called out to the scene. He was airlifted to Royal Preston Hospital, though sadly died a few hours later. Commenting on her volunteering work, Sarah said: “It is the least I can do to give back to a charity that helped my husband at a critical time.”

Very many of those who represented their charity at the event had similar stories to tell. Personal tragedies or experiences had moved them to get involved in their chosen charity work.

Freemasonry however promotes an ethos of helping those less fortunate than themselves, whoever they may be and unlike many fundraising organisations does not seek support from the public. All the money is raised entirely from Freemasons and their families. As Assistant to the Provincial Grand Principals David Randerson remarked in his closing address: “We raise the money quietly. We don’t shout about it. Although perhaps nowadays, we should be a little more vocal about how much good Freemasonry does in our communities. £61,000 donated to charities is a huge amount for a relatively small number of lodges and chapters that meet at Adelaide Street to raise, and it is worthy of public attention.”

A full room of Masons and recipients of donations at the Charity Giving Night.