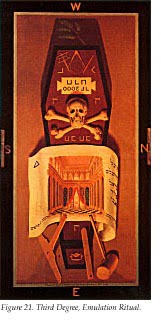 L’Ordre Martiniste of Papus (Dr Gérard Encausse), created in 1888. Papus was its sole Grand Master from 1888 till his death in 1916. The Order went dormant and was revived by Philippe Encausse, his son in 1958. In 1960, taking the succession of Henri-Charles Dupont, Philippe Encausse became Grand Master and revived the Order. His occupied this office from 1960 and resigned in 1971, Irénée Séguret succeeded him in 1971 and stayed in office till 1974, Philippe Encausse took the function again in 1975, finally resigning in 1979. Emilio Lorenzo leads the Order since 1979.

Many Martinists objected to this limitation of their religious freedom. A number of them, mostly outside France, simply resigned, others joined two newly created Orders:

The foundation of both orders was achieved at the request of Philippe Encausse, to offer an alternative to the objecting members of his order.

L’Ordre Martiniste-Martinéziste of Lyons was founded by Charles Detré
in 1916.
The successive Grand Masters of this Order were: Charles Detré “Teder” (1916-1918), Jean Bricaud (1918-1934), and Constantin Chevillon (1934-1944). It was finally closed by its last Grand Master Henri-Charles Dupont on 14 December 1958 by a merger with the Federation of the Martinist Orders of Philippe Encausse, and the Martinist Order of the “Elus Cohen” of Robert Ambelain.

L’Ordre Martiniste et Synarchique is a British branch of the Martinist tree. Little is known about its history, and the members of that Order are very discrete. Several groups of this Order were installed in Canada.

L’Ordre Martiniste des Elus-Cohen de l’Univers founded by Don Martinez de Pasqually in 1768. It was merged with Freemasonry by his disciple and successor Jean-Baptiste Willermoz. It was revived after World War II by Robert Ambelain, and definitively closed by him in a declaration printed in the Martinist magazine L’Initiation, in 1964.

Augustin Chaboseau was a member of the original Supreme Council of 1888, and was in reality the occult director of the first Martinist Order. Objecting to the religious orientation of Charles Detré, and the Universal Gnostic Church, he continued to transmit the Western tradition through this organization. Directly or indirectly, he initiated Martinists who would continue the fight for religious freedom: Jules Boucher, Gustave Lambert Brahy, Maurice Warnon.

L’Ordre Martiniste Traditionnel of the AMORC. Reserved to the members of the Ancient and Mystic Order of the Rose and the Cross (A.M.O.R.C.) created by Spencer Lewis. This Order was validly established by Ralph Maxwell Lewis, son of Spencer, initiated by Augustin Chaboseau and appointed as Sovereign General Delegate for California and the United States of America.

Ralph Lewis separated the American Delegation from the parent Order on 14 August 1951 to created a new Order using the same name as Chaboseau’s, and claiming to be his rightful successor. This is the only Martinist Order refusing to admit Martinists from other Martinist brotherhoods as visitors.

L’Ordre Martiniste Initiatique was created by Jules Boucher also as a reaction to the growing influence of the Universal Gnostic Church. His intention was to reconnect Martinism with Freemasonry.

The French freemasons, being in great majority hostile to Christianity, didn’t support his efforts and this order disappeared quietly with the death of its founder.

This branch of Martinism practically disappeared with the demise of Gustave Brahy in 1991. There is only one group remaining, under the guidance of Brother Loruite.

L’Ordre Martiniste des Pays-Bas, also created at the request of
Philippe Encausse in 1975, to allow members of the Martinist Order to keep the freedom to worship in the churches of their choice.

The Hermetic Order of Martinists (HOM) was inaugarated by a group of British Martinists on 14 March 1978 with the late British freemason and esotericist, Desmond Bourke (Sâr Olibius) as the first Grand Master. Membership is only open to men who are regular Craft Freemasons and are also members of the Societas Rosicruciana in Anglia (SRIA). See glhom.org.uk.

The Martinist Order of Unknown Philosophers (or M.O.U.P.) is descended from the Lyon Martinists and is distinctly spiritual and Christian in outlook. See moup.org/.