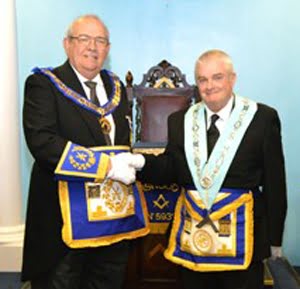 The brethren and guests of Wilderswood Lodge 5932 were highly honoured by the presence of the Deputy Provincial Grand Master Philip Gunning on the occasion of the installation of Martin Sim into the chair of King Solomon.

The installation ceremony was expertly conducted by the outgoing master Jim Bradley who, assisted by other members of the lodge and under the ever-watchful eyes of the director of ceremonies John Parr, resulted in a very sincere and well executed ceremony. 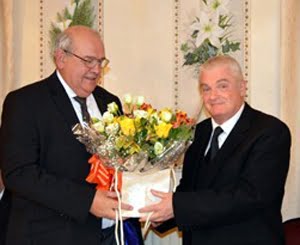 Martin Sim presenting Philip Gunning with flowers to pass on to his wife.

On completion of the ceremony Philip congratulated Martin on attaining the chair of King Solomon and thanked Jim Bradley and all the other lodge members who took part for what had been a wonderful ceremony and as always on such occasions, brought the greetings and best wishes from the Provincial Grand Master Tony Harrison who wished all those in the lodge health, strength and happiness.

In reply, Martin thanked Philip for his kind sentiments and went on to present him with charity donations consisting of three cheques: £400 to the West Lancashire Freemasons’ Charity, £300 to the Masonic Charitable Foundation and £50 to Ecclesholme, totalling a very generous £750. Philip thanked the members of Wilderswood Lodge for their generosity on behalf of all the recipients.

The festive board which followed, consisted of fine fare, in a warm and relaxed atmosphere and in the friendly and spirited manner in which the members and visitors of Wilderswood Lodge enjoy themselves on these occasions. At the end of the evening Martin presented Philip with flowers for his wife Anne.