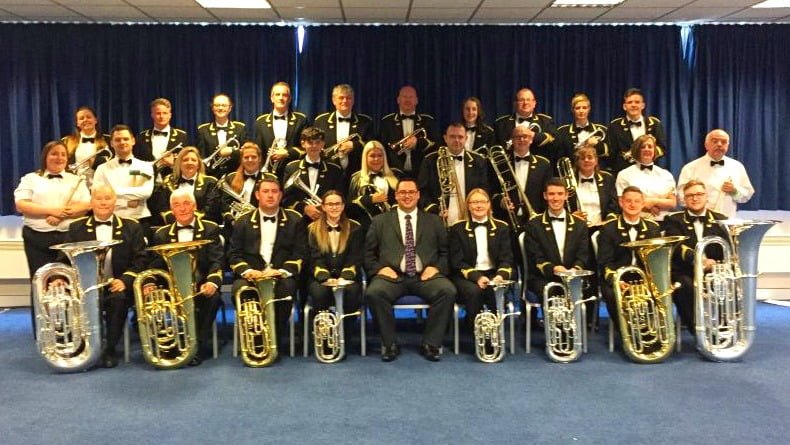 WBro Howard Nuttall ELMBF Chairman, WBro Malcolm McCarthy ELMBF Secretary made their way to sunny Greenfield in Oldham to attend a “Night at the Movies” Concert given by Boarshurst Silver Band.

They were accompanied by their Ladies Mrs Carol Nuttall, Mrs Joan McCarthy and Mrs Christine Errock who, together with the large Band Club audience, thoroughly enjoyed the spectacle of some amazing music whilst watching edited film clips on the large screen.

The purpose of our visit was to present the Band with a Donation to fund the production of a CD celebrating the band’s 170th Anniversary – watch the video of the presentation below (now viewed by over 1000 on Facebook!)

So who are Boarshurst Silver Band ?

Boarshurst Band was formed in 1849 at Boarshurst School in Greenfield, which make it one of the oldest established brass bands in the country. Wasting no time, they performed at the very first Belle Vue contest in 1853 playing ‘The Hallelujah Chorus’ and ‘Fill the Shining Goblet’. By 1877 – the band had acquired a full set of ‘Besson Best’ instruments and also engaged the legendary Alexander Owen as the Bands Conductor, this was Mr Owens first professional appointment.

Not satisfied with the current band room the land in Greenbridge Lane was purchased for building a band room in 1901 and The Boarshurst Brass Band Institute Limited was formed. From 1926 to 1930, the band achieved outstanding results under the Professional tuition of J.A. Greenwood, and then Charles Anderson, who composed the famous contest march ORB, with which the band won many prizes.

In 1938 the famous Harry Mortimer was appointed Professional Conductor and expectations were very high, but the war years intervened, and the band room was commandeered by the Home Guard.

The early 1970’s saw many changes on the committee, and the appointment of a new secretary, Arthur Woodhead, who had the clear intention of returning the band to its former halcyon days. Then, in 1972, Bryan Garside was appointed Musical Director, and very quickly achieved some outstanding results. In 1979 new headquarters were established with the purchase of the Band Club which was actually very close to the original home of the band in Greenbridge Lane acquired some 80 years earlier.

In the late 1980’s, David Morris was appointed M.D. and the band had remarkable success, finally gaining promotion to the Championship Section. Also at this time, the Youth and Training bands were making good progress and towards the late 1990’s, under the Direction of Linda Finan. In November 2000, Boarshurst Band was successful with its application for Lottery Funding, supported by the Arts Council of England. At this time the band commissioned a piece of music and as a result, Peter Graham penned ‘Northern Landscapes’.

In 2001, Jonathan Webster was engaged as M.D. and the band entered yet another successful period. In 2002, they won the French Open Championship at Amboise in the Loire Valley. Over the next three years the band won several Local contests and appeared at the National Brass Band Finals on two occasions at Harrogate, North Yorks.

In May 2008, David W Ashworth was engaged as Musical Director. After only 12 months with the band, David led them to become Tameside Champions, 1st place at the Hebden Bridge March Contest, and on Whit Friday winning 7 prizes out of 8 Contests entered. In October that year the band gained 3rd prize at the Pontins Championship at Prestatyn and followed it up with a 3rd place at the Wilkinsons Northern Open Championship in November.

The 2011 Contest season began with a victory at the Brass at the Guild Contest at Preston Guild Hall. For the first time since 2004, the Band qualified for the National Finals 2011 after playing at Blackpool’s’ Winter Gardens with a spectacular performance of John Gollands Prelude, Song and Dance. David took the band to the Mineworkers Contest at Butlins, Skegness, where they won the 3rd Section first prize two years running in 2012 and 2013.

In 2014 David left the band for pastures new and the MD position was filled by James Garlick. An innovative MD and accomplished musician, James has pushed the band to strive for further musical firsts, such as the introduction of electro bass. The plan is to grab the attention of young players and get them involved and enjoying brass banding, both traditional and contemporary. The training and development of the very young players, initially by Eric Landon, Dean Redfern and Linda Finan is and has been, an integral part and policy of the band and club for some 40 years.

Since James took over the baton, the band have gone from strength to strength, winning the North West Areas 3rd Section (first contest for James with the band!). Then subsequently qualifying for The National Brass Band Championship of Great Britain three times in a row – taking the band from the 3rd section to the 2nd! Finally, in 2017, the band returned home to the North, after winning the finals and being crowned 2nd section champions!

2018 sees the band promoted to the 1st Section and continuing to improve in leaps and bounds. In our first year in the 1st Section, we have had two fantastic results which now leaves the band at the top of the table so with hard work towards the Regionals next year could see the band move in to the Championship Section.

Recently the band have been on tour to Holland where we played in some fantastic venues and entertained the sell out concerts.