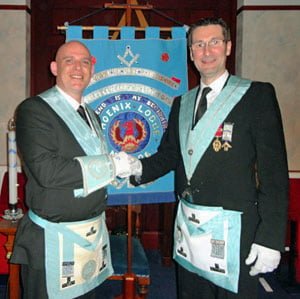 Members of Phoenix Lodge of Installed Masters No 9206 held their installation meeting over at Brookfield, Westhoughton Masonic Hall and there were over 90 members in attendance to witness the installation of Mark Howard.

The meeting was opened by the WM Andy Sumner and as the lodge meets at various Masonic halls across the Leyland and Chorley Groups, dispensation to hold the meeting in Westhoughton was read out in open lodge by the secretary. The remainder of the lodge business was executed by Andy with a composure befitting a master about to be prominent in the ceremony of installation.

The principle guest for the evening Michael Threlfall, Provincial Senior Grand Warden, was admitted in to the lodge room and was greeted by the WM. Michael responded by saying that it was his great pleasure to be representing the Provincial Grand Master Tony Harrison.

The next business was to install Mark Howard who had been elected at the last regular lodge meeting when it met at Horwich Masonic Hall earlier in the season. Andy invited Ian Smith to act as installing senior warden and Mark Arrowsmith as installing junior warden to assist him in the ceremony. Gary Smith then presented Mark to the brethren of the lodge as the master elect.

Andy then installed Mark into the chair of King Solomon with composure, and executed the proceedings in time honoured fashion. There was an air of confidence around the room and in no time Mark was sitting in the chair and was listening to the working tools of each of the degrees being presented to him.

Gary Fisher presented the working tools of an installed master. Gary Smith those of the third degree; Richard Frazer–Bastable the second degree tools and Michael Harrison the first degree working tools; all were delivered expertly. The address to the WM was given by Peter Lockett, followed by the address to the wardens by Peter Allen. The final address of the evening was presented to the brethren and expertly given by Michael Threlfall.

Mark went on to appoint his officers for the forthcoming season; John Anderson as SW, Derek Robinson as JW and for the third year Graham Fish as lodge DC. At the end of the installation ceremony his first task as WM, was to present a number of cheques. Michael then took great delight in receiving and reading the amounts and recipients; these being £300 for St Catherine’s Hospice; £300 to Derian House; £300 the Tercentenary Fund; £200 to West Lancashire Freemasons’ Charity and £200 to Teddies for Loving Care.

Michael brought greetings from the Provincial Grand Master Tony Harrison and said that if Tony had been there, he was sure he would have bid Mark the very best of health and happiness whilst in the chair of King Solomon. He also thanked the immediate past and installing master, Andy Sumner on behalf of Tony for all the obvious hard work that he had put in, commenting that he had witnessed a fine installation. Mark closed the lodge in due form and following the meeting, all members and visitors retired to the dining room where a fantastic meal was had by all. The meal comprised of home-made tomato and basil soup; top side of roast beef and vegetables; profiteroles and chocolate sauce, rounded off with coffee, cheese and biscuits. 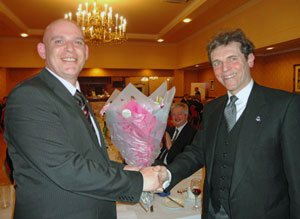 Mark presents Michael with flowers for his wife.

Michael gave his own congratulations to Mark and wished him a happy year in the chair. The toast to the health of the WM was given by Andy pointing out that Mark was the 30th master of the lodge and that he was therefore privileged in joining a small group of honoured masters.

Mark is very much a family man and is married to Kay. They have four children; Kayleigh, Mark, April and Lorcan, all of whom very much take up quite a bit of their time. Mark is currently aspiring to play the banjo and the reason in his own words is: “Because it is impossible to play a sad tune on a banjo.” Mark is also a member of the Round Table and he has served in many roles including chairman, area chairman, area president and has duly served on the national executive as the webmaster.

He joined St Bartholomew Lodge No 6071 in 2002 and went through the chair in 2012. Since then he has been ADC and for the last two seasons DC. He is also currently the charity steward of Coronation Chapter of Westhoughton No 7258. One of Mark’s most recent recollections was having the privilege to propose the toast to Howard Jones, who at the time was Deputy Provincial Grand Master, at the Chorley Group Masters and First Principals dinner. He has also rekindled the Westhoughton Masonic Research Group and launched it as Perfect Points. He is currently the vice chairman of this group. More recently he served as publicity officer for Westhoughton Masonic Hall and is the current yearbook secretary for Chorley and District Group along with holding down the assistant treasurer’s role at the hall.

The evening passed on and the camaraderie amongst the diners was exceptional. Everyone took away some very fond memories of the evening especially Mark and Andy.