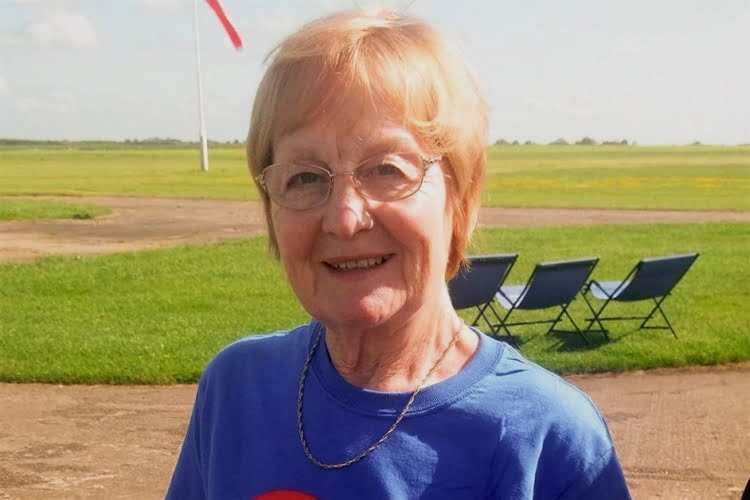 Mari Street, the widow of Bro Leslie J. Street who was a member of Wayfarer Lodge No. 8679 meeting in Coalville, jumped out of a plane at 13,000 feet for a skydive in order to raise funds for the British Lung Foundation

Mari recalls: ‘In 2008, Les developed an annoying cough so we went to the doctor. At first, we thought it was just a chest infection. But then in March 2009 a diagnosis of pulmonary fibrosis was given. In just 8 months he died. Les was everything to me. Losing him was so hard. Pulmonary fibrosis is such an insidious, shockingly cruel condition. That’s why I decided to start fundraising. If the money can go to research which can help other people, then it’s worthwhile.’

In what would have been Les’s 70th birthday and 7 years after he died, Mari, who is 68, set out to raise money for research in his memory by skydiving. Members of the Wayfarer Lodge, including Les’ son W Bro Mark Street, got together and supported Mari with a donation of £250.

After the skydive, Mari said: ‘There was never a point where I felt afraid. It was just beautiful, and incredibly exhilarating. We free-fell for 45 seconds, then suddenly I heard a flapping sound and my parachute went out and everything went so quiet. We just drifted down. It was amazing, honestly.’

W Bro Mark said: ‘I proposed my Dad into Freemasonry in 2004 and he progressed through the offices in the lodge and was Junior Warden at the time of his untimely death. To me, my Dad epitomised what Freemasonry is all about as he always had time for anyone, gave what he could, in terms of time and money, to support worthy causes, was totally dependable and reliable and committed absolutely to the offices that he held.’

Mari concluded: ‘People ask me what I think Les would have said. I think he would have told me I was bloody mad! But proud of me, like he always was. He was such an incredibly funny, lovely man. This condition has no respect for anything or anyone. It was so awful to watch him struggle so much. I know that money I’ve raised can help other people, and it makes it all so worthwhile.’