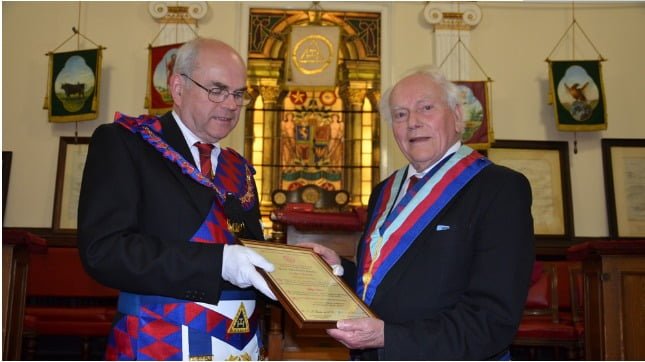 After being welcomed into the chapter room the first item on the agenda was to ballot for and if successful to exalt John Mullen into Mariner Chapter. The result was successful and a full ceremony of the exaltation was carried out. However, the difference being with this night was that, Mariner’s Visiting Grand Lodge Officer, Malcolm Rigg was to pieces of new ritual entitled ‘The Exaltation Ceremony – Setting the Scene’, written by Peter Mason, the Deputy Grand Superintendent of the Province of Cumberland and Westmorland. This piece of ritual, which is read out at various times within the ceremony explains, what is happening, to both the candidate and the audience as it happens. The Exaltation Ceremony can be rather complicated as many do not hear it as often as the craft and, unlike the Craft, the location of the story changes throughout the ceremony without any obvious change in the scenery. This was well received by all, including very experienced Chapter Officers.

After the Ceremony, Gordon Brewis, rose to present Geoff Murdoch with a certificate to mark 50-years continuous service to Royal Arch Masonry. Geoffrey was exalted into Hedworth Chapter in March 1966, becoming a very active member, and became their First Principal in 1977, 2000 and again in 2001. He held the office of Scribe Ezra right up to the time Hedworth became Mariner Chapter in 2008. As well as having a busy career in his own Chapter, Geoff was Provincial Grand Treasurer for ten years, with promotions including Provincial Grand Sword Bearer, Past Provincial Grand Scribe Nehemiah before receiving Past Assistant Grand Director of Ceremonies of Supreme Grand Chapter in 1991.

Gordon then presented the certificate to well deserved applause for this popular member, Geoff remained on his feet, to then find his glasses before reading out a short prepared response. The convocation was then closed for all to retire downstairs to the festive board.

At the festive board, Geoff’s good friend, Bob Oxley, rose to inform all, a bit more about the man, Geoffrey Murdoch. Not only the fact that he and his wife being keen volunteers to many charitable organisations but also the great work he had done over the years in fundraising for many local projects. Bob then amused all by telling the story that every Sunday night they would have a phone conversation regarding what nights they were due to go out visiting to various masonic meetings that next week. A splendid celebration that evening was capped off with a presentation from the Chapter to Geoff of a bottle of his favourite Whisky together with some flowers to take home to his fully supportive wife.