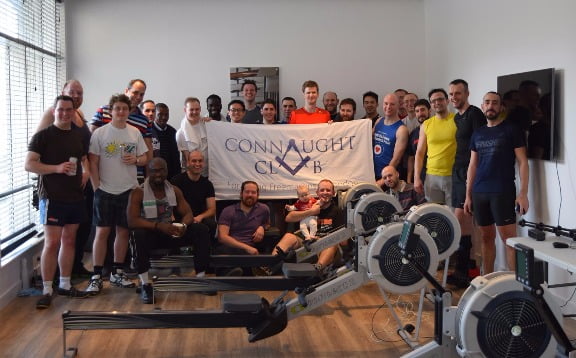 On the Saturday, 12th March 2016, around fifty members of the Connaught Club, the club for Freemasons under the age of 35 in London, plus friends and family, came together on an uncharacteristically sunny afternoon at Fulham Reach Boat Club to cumulatively row the length of the Thames, on rowing machines, in aid of Rethink Mental Illness.

Rethink Mental Illness, in partnership with Mind, is behind the biggest campaign to end the stigma and discrimination that people with mental health problems still face in England.

The event was organised to raise funds for Rethink Mental Illness to help them continue their fantastic work in reducing the very damaging and spiteful stigma surrounding mental illness. So far, the Connaught Club has raised over £5,000 via donations from Lodges, Connaught Club members, friends and family members and from the sale of specially designed lapel pins. Over 300 of the Thames to Change lapel pins have been sold to freemasons across London, and further afield.

With one in four people suffering with a mental illness at some point in their life, the Connaught Club also wanted to highlight that we all do, or will, know someone who is unwell and in need of our help. They may be your partner; your mother; your father; your sibling; your friend; or you may have personal experience. No matter who’s suffering, one thing is guaranteed, at some point in your life, you will have to deal with the issue of mental illness – if you haven’t already.

The Connaught Club believes the more we discuss our experiences of mental illness, the sooner the metaphorical elephant in the room will be eliminated.

Not only were Connaught Club members out in force to take on the challenge, but they were also joined by Daniel and Kate, of Rethink Mental Illness, who helped knock off a very respectable amount of kilometers from their target distance!

With so many incredible people participating, it didn’t take long for them to reach their target in just under six hours.

The Connaught Club will continue to receive donations until June, when it will present a cheque to Rethink Mental Illness.