From the Daily Commercial website by Miller Ives on Saturday: 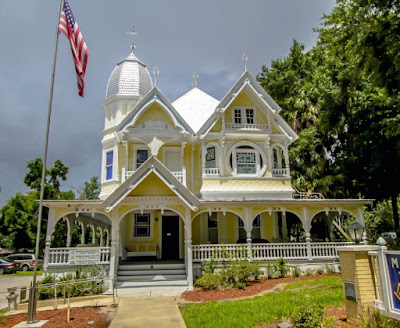 You can’t miss it — it’s a giant yellow house adorned with a tin cupola and several ornamental lightning-arrest rods set on the roof. A wrap-around porch and brick columns surround a huge Masonic Lodge sign in the front yard — all of which make the structure look more like a real-life gingerbread house.

One of two examples of this type of Queen Ann architecture left in the state. The Donnelly House (also known as the Mount Dora Lodge No. 238 F&AM), was added to the U.S. National Register of Historic Places in 1975.

“It is the most photographed house in the state,” said Keith Potter, Worshipful Master of the Masonic Lodge, as he hung a picture back on the wall Saturday morning.

And lodge members are hoping to keep it that way.

Potter was among a number of lodge members, city council members, business leaders and residents who came together Saturday to start renovating the house.

Bob Swiger, a past Worshipful Master of the lodge, said many of the group’s 214 members have grown older so upkeep of the building has declined.“Something this nice you want to keep up,” said Swiger. 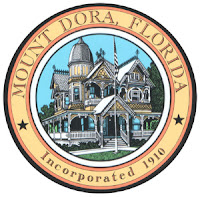 The renovation comes as friction between the lodge and the city council builds over whether the group should be compensated because the city uses the building’s image on its official seal.

Members made an unsuccessful attempt to get the city to pay $300 a month for some of the lodge’s utility bills because the structure was deemed iconic.In a recent 4-3 vote, the city council rejected that request and another one to pay to the lodge as compensation for using the image.

Potter said with more than 200 lodge members it’s not difficult for them to pay the bills, but it’s the principle.

“The city council twice voted down any kind of help, even though the Donnelly House is prominent during many city festivals, such as the Christmas walk, light up Mount Dora, Forth of July, and is the image used as the city’s official seal for which the Masons had never been compensated,” said Burch in a press release.

At least one lodge member said the group may try to get the city to remove the building’s image from its seal.

Councilman Denny Wood has provided financial and business guidance for the lodge.

Burch has been contacting residents about making regular monthly pledges. And according to Mason Erick Forholt, the lodge is finalizing a non-profit “Friends of the Donnelly House” fund for ongoing maintenance to preserve the historic structure.

On Saturday evening, Leigh Love, of PizzAmore, was expected to lead a raffle in hopes of raising more money for the lodge.

“This is a state icon, we want to keep it looking nice,” Potter said.

According to a press release, John P. Donnelly, a entrepreneur from Pittsburgh, Pa., was the builder of the Donnelly House. He moved to Mount Dora 130 years ago. Upon his death, the home was sold to the Gorham family, who in turn sold the building to the Mount Dora Masonic Lodge in 1939.