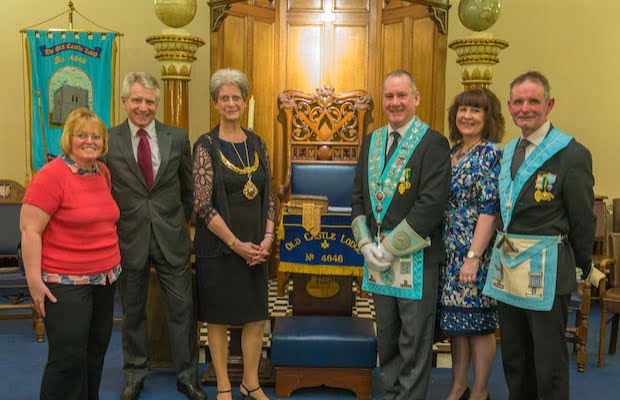 Macclesfield town mayor Cllr Liz Durham was amongst 40 guests and members who attended the Old Castle Masonic Lodge social board on Wednesday 3rd February at Oakleigh House in Macclesfield.

The visitors – both male and female – were given an explanation of members’ roles and their jewels of office, whilst sat in full regalia in their formal places in the Masonic Lodge room.

There was also an explanation of Freemasonry and some searching questions from the ladies present, which were expertly handled by experienced masons Tony Costello and Roger Hordley.

A spokesperson for the group commented: “Freemasonry can be different things to different people; meeting likeminded people and making new friends, watching or acting in ceremonies, helping deserving causes, delving into history or a mixture of all.

“It is a multi-faceted hobby which can develop an individual through a series of 2-part plays which in turn promote integrity, honesty, spirituality and fairness.”

The mysteries – often referred to as masonic secrets – were not revealed during the event but these refer to the modes of recognition used by masons to acknowledge one another in masonic circles, and are said to relate back to how ancient stonemasons used to identify one another.

Freemasonry is one of the oldest fraternal organisations, with many famous people listed as being members – including: Rudyard Kipling, Winston Churchill, Issac Newton and the Duke of Edinburgh.

Questions from visitors centred around topics such as women in freemasonry, the church’s view of freemasonry and the variety of regalia worn.

The United Grand Lodge of England – to which Old Castle Lodge is affiliated – is a male only organisation. There are separate women’s orders of freemasons as well as a mixed organisation, called co-masonry.

Cllr Liz Durham is the first mayor of the new Macclesfield Town Council, and is currently working to establish both the constitution and structure of the fledgling council.

She is looking to identify opportunities to help local citizens through the council’s Community Grants Scheme which is funding the Barnaby Festival, Victoria Park, Arts in the Town and Macclesfield Pioneering Women.

For more information on Freemasonry in general, please see: www.ugle.org.uk