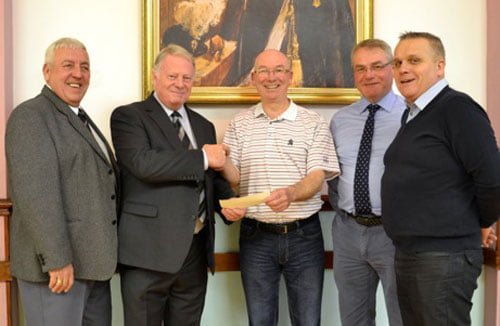 The Liverpool Group of Freemasons based at Liverpool Masonic Hall in the elegant Georgian area of the city, have with their national charity, made a donation to the Sefton Stars Basketball Club. This community based basketball club started in Crosby with just 20 enthusiastic kids from the area and has now grown to over 150 enthusiastic members, with a permanent home gained through some adversity at Fernhill in Bootle.

The activities of the club has greatly expanded from those early days to include a wide range of activities such as badminton, 5 a side football, indoor cricket, rounder’s netball, indoor bowls and for the first time, Morris dancing. In the sports hall the old tiled floor has been replaced with a solid beech wooden floor. In partnership with the local school, St George of England, the school gymnasium has been refurbished for use as a dance studio and also offers classes in boxercise, Khai-Bo, spin bike, fit ball, legs bums and tums, Zumba and yoga. This has now expanded into health awareness encompassing obesity strategy, a sense of pride and respect for oneself and the community, resulting in a marked decline regarding anti-social behaviour.

With the club subsequently receiving charitable status it was selected by local Freemasons because they offer many sporting activities to the local community which covers all age groups and offers valuable a service within the community. Liverpool Group Chairman Bob Povall, on handing over a cheque for £200 to Phil Pattullo, who was standing in for Tom Walsh of Sefton Stars, said on behalf of his fellow Freemasons how delighted they all were to be able to show their support for such a fantastic organisation as the Sefton Stars Basketball Club.

Charitable giving is central to Freemasonry and the Liverpool Group are more than happy to support organisations within the area that give their all in their locality. The nation Freemasons’ Grand Charity works on behalf of all its members within England and Wales, donating £1,000,000,s to worthy causes every year, and Bob said how happy he was that they too have joined with us to support the Sefton Stars.