There were over 100 Masons from both Leyland and Chorley Groups present at Wellington Park, Leyland to witness a celebration, and to say farewell, to Ray Martland Assistant Provincial Grand Master of the Province of West Lancashire. Ray is retiring from his office of six years and the Leyland Group wanted to hold a celebratory dinner in appreciation of his commitment to the Province and to both Leyland and Chorley Groups.

There was an aura of anticipation and excitement for the evening’s event. At the reception everyone gathered renewing old acquaintances and making new friends. Taking to their tables, Provincial Director of Ceremonies Dave Thomas introduced Ray Martland to the dining room and when Ray was seated everyone took their seats.

An excellent meal was served by the staff at Wellington Park which comprised of tomato soup, braised steak and onions, sticky toffee pudding and custard; followed by coffee, cheese and biscuits. Following the meal a number of toasts were given before the most important one of the evening and the reason for the celebration. It was of course the toast to the celebrant and this honour belonged to the group chairman.

Stewart Seddon rose and immediately turned the tables on Ray when he started by enquiring whether Ray was sitting comfortably so that he could begin. This, Ray always asked at numerous celebrations over the years and there were in fact, 73 such celebrations across both Leyland and Chorley Groups. Stewart’s first words were of course to point out that everyone present was here in order to pay tribute and to thank Ray for his contribution not only to the Leyland Group but also the Chorley Group, the Province and the wider Masonic family. He then proceeded to give a precis of Ray’s early life and Masonic career.

Ray was born in Wigan in 1942 and subsequently attended Up Holland Grammar School where he met his wife to be, Carol, and they recently celebrated their golden wedding anniversary. At school, Ray was fond of music and looking back, some of his contemporaries were Jimi Hendrix, Paul McCartney and Barbara Streisand to name a few. Despite being a musician and wanting to be a music teacher, Ray decided that engineering was a better career having whetted his appetite as an engineering draughtsman whilst working for someone else. He eventually went into a partnership manufacturing metal pallets, and this being a very successful partnership; he was able to retire in 1990, when he was only 48.

In Masonry, Ray was initiated into Peace Lodge No 2269 in 1973 and has therefore been a Mason for a little over 43 years. It took 13 years to go through the chair of the lodge and he received his first appointment in 1991 as PrGStwd. This was the first of no less than five acting ranks in the Craft and three in the Royal Arch. Following his Provincial stewardship he became JW of the Province in 1997. He then became Provincial Grand Organist in the Royal Arch in 2000 and was appointed Assistant Grand Director of Ceremonies of the United Grand Lodge of England in 2001. An appointment to Provincial Grand Almoner in 2002 covered both the Craft and Royal Arch. He then became Assistant to the Provincial Grand Principals in 2008 and after just 23 months in that office he became Assistant Provincial Grand Master in 2010 responsible for the Leyland and District and Chorley and District Groups.

A number of gifts were subsequently presented to Ray by Stewart, Chris Blackwell and Mike Pinckard each gift being from the groups with the last one being a bouquet of flowers for Ray’s wife, Carol. Stewart commented: “Please give them with our love, our thanks and our appreciation for her support of you over so many years.” 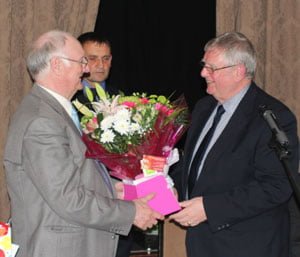 Ray (left) being presented with a bouquet of flowers for Carol overseen by Dave Thomas.

Ray’s response to his toast was a gracious one and in line with the evenings celebration. It was sincere with a hint of humour to lighten the mood. Nothing short of what was expected from Ray who is known for his light amusement in his replies.

Ray thanked a number of people and none more so than Mike Pinckard for his efforts in planning the evening and ensuring that everything had gone to plan. He also thanked Wellington Park for allowing the evening to go ahead and to the staff for their hard work in preparing and waiting on the tables. He also thanked the current group executive for the way in which they are managing the group, thanking the members for being present and for receiving him both on the evening and of course for all their support during his tenure as APrGM. He thanked the acting officers too from over the years and for being part of the team.

The end of the reply came quickly and the closing line was a play on a famous quote from the Two Ronnies, and gesturing towards Stewart he said: “And now, it’s goodnight from him…and its goodbye from me.” Everyone stood and gave a round of applause both for the reply in response to his toast and in recognition of the years in which Ray had given to Freemasonry and as an Assistant Provincial Grand Master in particular.

The proceedings ended with Steve Hallam giving the tyler’s toast following which everyone present went home knowing that they had had a good evening celebrating the retirement of a very special man. 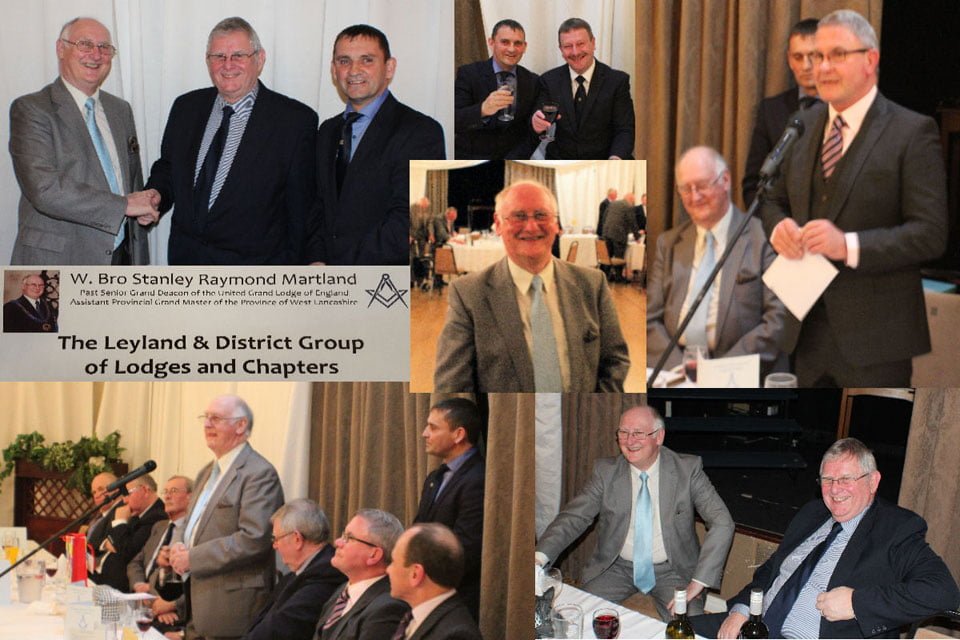 A fitting celebration for a very special man.