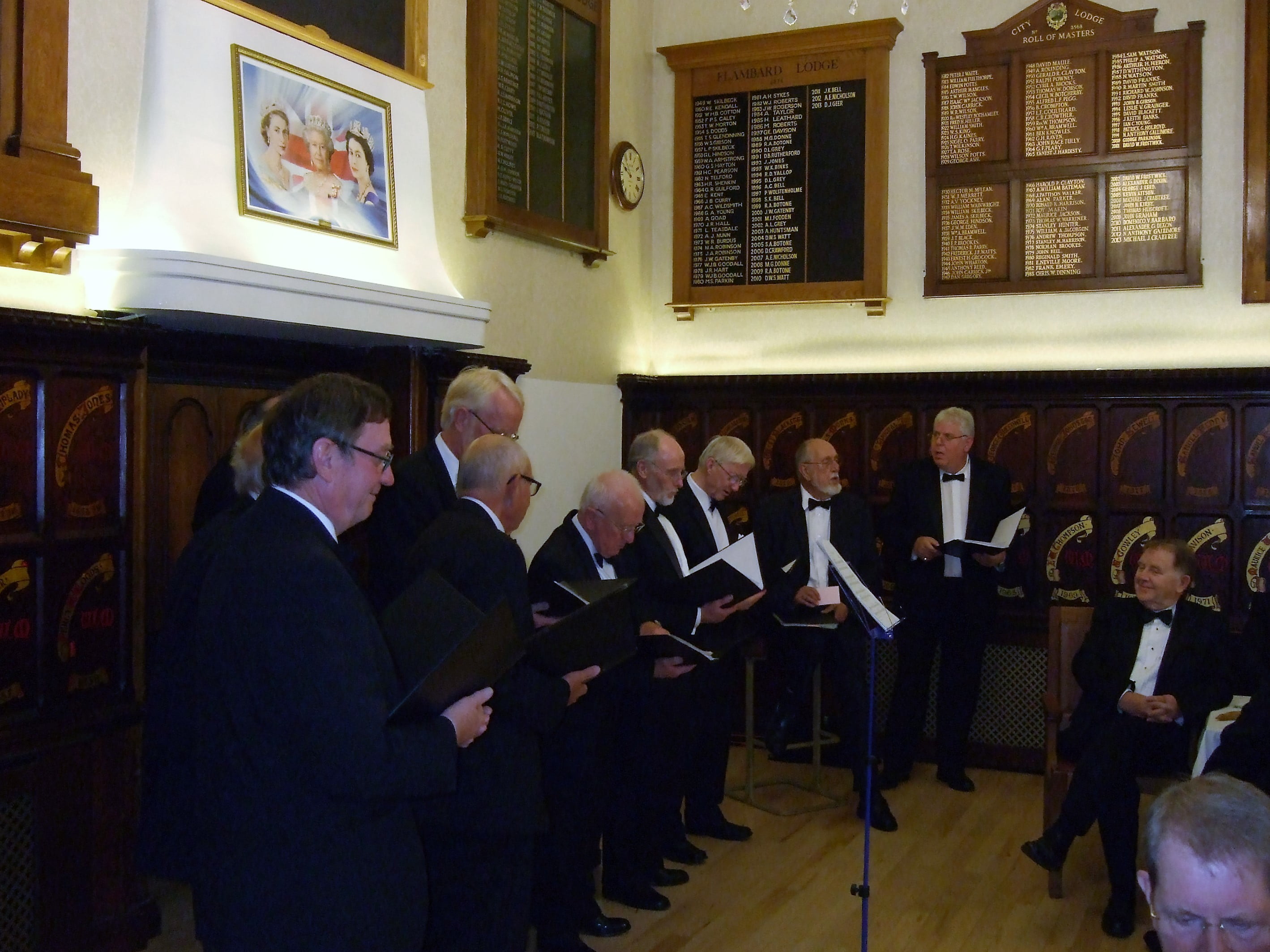 Lawrence and man of many talents celebrates 50 yrs.

Over the years there have been many who have come to know WBro Frank Lawrence Jones as Lawrence and his many attributes. He has been a College lecturer and continues to use those talents be delivering presentations and interesting lectures to various Masonic audiences.

A singer of note for many years and uses any opportunity to exercise his vocal cords. To that end he was a founder member of the Durham Masonic Male Voice Choir. An entertainer and a distinguished Director of Ceremonies for many years as well as being a thoroughly dedicated Freemason.

It was no wonder then that at the last regular meeting of Bede College Lodge who meet at Durham Masonic Hall over seventy brethren from twenty five lodges attended to celebrate Frank’s 50yrs in Freemasonry. The Assistant Provincial Grand Master, WBro David Sanders Hay attended also to present him with a certificate from The Provincial Grand Master in recognition of that achievement.

However, before making that presentation the representative of the Provincial Grand Master gave the brethren an insight to contribution that Frank made not only to freemasonry but the wider community.

Lawrence was born on the 15th of March 1938, just before the out break of the Second World War, into a truly Masonic family. His Grandfather, Bertram Sydney Jones was a member of Whitworth Lodge and his father Bertram Leslie Dave Jones, joined Bede College Lodge No.4840 in 1948. It was perfectly natural that at the age of 28 years Lawrence joined the same Lodge on the 23rd September 1966 (exactly 50 years ago that particular evening)

So began an enthusiastic and energetic Masonic Life. Lawrence worked his way “up the ladder” with keen determination and became Worshipful Master in 1983. During his year in office as Master, he made one hundred and fifty visits to fifty different lodges. He became a Founder member of Johnstonian Lodge No.9301 in 1989 and served as its secretary for eighteen years.

Craft honours soon followed. Lawrence was appointed PProvGStB in 1992, promoted to PPGSwdB in 2003 and became PPJGW in 2015.

In Royal Arch Chapter, Lawrence was exalted into City Chapter in 1977 and was First Principle in 2000, then served as Treasurer for seven years after that. He was appointed PPGSoj in 2005 and promoted to PPGReg in 2011. He has also actively involved in several other orders.

If being a member of the male voice choir was not enough, Lawrence was also the Quiz Master for the annual Durham Quiz event for some ten years and organised stalls for five of past Raby Gala’s.

In between all of these Masonic activities he has for many years entertained many audiences as a guest speaker covering a multitude of fascinating subjects and topics.

Lawrence’s skills in this regard must have come from the genes inherited from his father. Following in the footsteps of his dad he became a teacher and then a Further Education Lecturer. Now long retired, Lawrence and his wife Jean, who have been married for over fifty years, have two children and two grandchildren. As a couple they have taken a great interest in genealogy, which is yet another topic which Lawrence regularly lecturers on. They have traced there family antecedents back several centuries across the globe and offered their support to anyone who might want to learn how to do it for themselves.

After David Hay had presented Lawrence with his certificate the brethren retired to the festive board where the celebrations continued not only in the form of speeches and toasts but also in song. Members of the Durham Male Voice Choir including Lawrence assembled and sang the following; Roll Jordan Roll, Dixie Melody, The Bare Necessities, Men of Harlech, Tynesides where I come from and Marchin the Geordie.