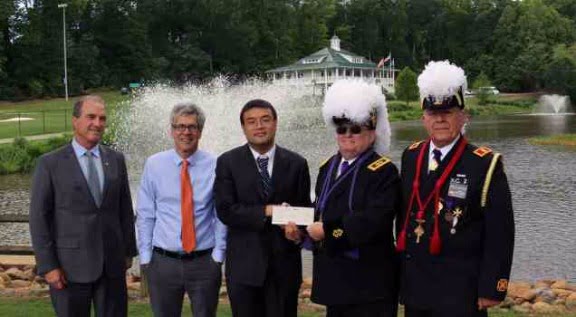 CLEMSON — Clemson University research scientist Zhicheng Dou has received a $64,786 grant from the Knights Templar Eye Foundation to study a microscopic parasite that can cause blindness, birth defects and other severe health consequences.

Toxoplasma gondii is a single-cell parasite that causes a disease known as toxoplasmosis. Between 30 million and 60 million people in the United States might be disease carriers. In many areas of the world, the parasite is even more widespread, infecting as much as 80 percent of the populations of portions of Europe and South America.

The majority of people who have been infected by the parasite are unaware they are carriers. Humans who possess healthy immune systems most often experience only short-lived, flu-like symptoms without further complications.

Toxoplasmosis, which is the second-leading cause of death from foodborne illness in the United States, is one of the world’s most common parasitic diseases and is capable of infecting nearly all warm-blooded animals.

Domestic cats and all other members of the cat family are the only animals within which the parasite can sexually reproduce and exchange genetic material. The parasite is excreted in cat feces. It is virtually impossible to recognize if your cat has been infected because, like humans, most cats have few symptoms.

Also, a cat can only spread Toxoplasma gondii for a few weeks. After that, its feces will no longer contain the parasite. But the parasites that are excreted by cats during the initial infection period exist as oocysts, which are tough cysts that survive and remain infective for several months in the environment. When animals or humans ingest oocysts, they can become infected. Humans and other animals can become infected by direct contact with the feces, eating contaminated meat, drinking contaminated water and a myriad of other manners.

“This parasite is everywhere,” said Dou, an assistant professor in Clemson’s biological sciences department. “A cat can get it from eating an infected mouse or bird. Then a cow can get it from eating grass that contains the cat’s feces. Then a human can get it by eating the undercooked meat. This is why some countries — because of the ways they prepare their foods — have very high infection rates.”

Even though most people with healthy immune systems have few symptoms, the parasite has the ability to pass from the circulatory system and hide in brain tissue. Because of this, if an infected person’s immune system ever becomes compromised, then the parasite can leave the brain, re-enter the circulatory system, and attack organs throughout the body – oftentimes with deadly results.

“During the transmission, the parasites invade your body, but your immune system takes over and kills most of them,” Dou said. “But some find their way to the brain, where their metabolisms slow down, which in turn slows down their ability to replicate, rendering them relatively harmless. So far, there is no way to get rid of the parasites that hide in the brain, because current commercially available drugs cannot effectively cross the blood-brain barrier. So my research is focusing on how we can understand how the parasite feeds on its host cells in the human body and eventually design drugs that will starve the parasite and wipe it out of the body and brain entirely. This would result in a 100 percent cure.”

People with compromised immune systems — such as individuals with AIDS, those undertaking chemotherapy and recipients of organ transplants — are most at risk of developing severe toxoplasmosis. Infants born to newly infected mothers can also face serious complications. If a woman becomes infected early in a pregnancy, the parasite can traverse the placenta to infect the fetus. When this happens, babies with congenital toxoplasmosis can be born prematurely. The infection can damage the babies’ eyes, nervous systems and induce other dire symptoms, including complications that develop as late as their teens.

“This is the reason doctors tell pregnant women they should never change cat litter,” said Dou, who has been studying various aspects of Toxoplasma gondii for several years. “And if a pregnant woman becomes infected, she might not even know it because her symptoms are usually very mild. But if her infection is undetected, it can be very, very bad for the baby.”

The single-cell parasites invade the cells of warm-blooded animals, where they attempt to replicate. Via the grant, Dou will study how the parasites feed, what they feed on, and how to sever them from their food supply.

“The parasite is an obligate intracellular protozoan, which means that it can only grow and replicate within host cells. It’s not like some E. coli bacteria that can replicate in the environment without host cells,” said Dou, who conducted post-doctoral studies on toxoplasmosis at the University of Michigan before joining Clemson. “So the parasite actively ingests the nutrients of host cells – not only the small nutrients like sugar and amino acids – but larger nutrients like proteins. Several years ago, we revealed a novel pathway Toxoplasma parasites use to assimilate host proteins to support their intracellular replication. Within this pathway, proteases – enzymes used to chew bulky proteins into small building blocks – played critical roles. Recently, we have discovered that several proteases interplay together to optimize the digestion of incorporated proteins. In my lab, we will try to determine how the parasites access, ingest and digest host proteins. This will help us to design drugs to inhibit their ability to ingest and digest these proteins, thereby starving the invaders and curing the infection entirely.”

In people with severe infections, the parasites replicate rapidly and attack organs, eventually causing inflammation and scarring that often leads to death. Up to 3,000 infants in the United States experience eye damage due to the parasite each year, with the overall health care burden surpassing $3 billion annually in the U.S. alone. 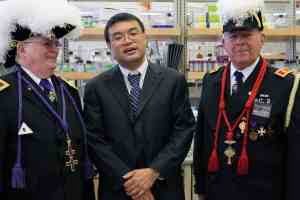 “The focus of the grant from the Knights Templar Eye Foundation is on children,” Dou said. “The eye is the organ that these parasites usually attack. And so Toxoplasma gondii is the most common pathogen that causes posterior uveitis (inflammation of the back of the eyeball) in infants and children. This can cause vision problems and sometimes a total loss of vision. But if we can design drugs that will kill the parasites, we will not only benefit eye infections but also all other infections associated with this disease.”

People with compromised immune systems should talk to their doctors about toxoplasmosis. Pregnant women should have routine blood checks to monitor for the infection. For those who maintain strong immune systems, there is minimal risk. But it is still a good idea to follow sanitation and food safety tips to reduce your chances of becoming infected.

Henry Adams, the Southeast department commander/Grand Encampment Knights Templar of the USA, presented the check to Dou. The Knights Templar Eye Foundation Inc. is one of two charities operated by the organization’s national governing body. Each year, it awards “Career Starter Research Grants” up to $65,000 each; “Competitive Renewal Grants,” also up to $65,000; and “Training Mentors for Developing Countries” with an annual stipend of $60,000. To date, the foundation has expended more than $23 million on research for the prevention and cure of potentially blinding diseases in infants and children.

“We received about 60 grant requests in 2016, and our Scientific Advisory Committee — which is made up of 10 of the country’s top leading surgeons and researchers in the field of pediatric ophthalmology — reviewed and selected 30 grant recipients,” said Adams, who was accompanied during the check presentation by John Marcucci, the grand commander of the Knights Templar of South Carolina. “It’s impressive that Dr. Dou’s peers regard his research as crucial and vital, both for diseases of the eye and also for the overall health of the human population. For these reasons and many others, we are honored to be able to support Dr. Dou’s scientific endeavors.”