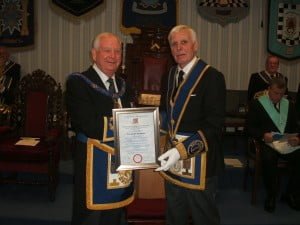 The members of Peace and Unity Lodge No 3966 recently gathered for their first meeting of the new Masonic season with a celebration of the 50th year in Freemasonry of Ken Sykes.

The initial business of the lodge was transacted by the WM Bill Widdowson, and then it was time to receive the Provincial Deputy Grand Director of Ceremonies David Thomas, who announced the presence of the Assistant Provincial Grand Master Harry Cox. He in turn processed into the lodge accompanied by the Chairman of North Fylde Group Duncan Smith, Vice Chairman Peter Greathead, Grand Officers Jim Woods and Giles Berkley, ably supported by acting Provincial officers.

The Worshipful Master welcomed Harry Cox and offered him the gavel of office, which was accepted and Harry took the Master’s chair. After salutations from the brethren he introduced the main business of the meeting which was to honour Ken’s 50 years in Freemasonry. As requested by himself, Ken stayed in his usual place in the lodge rather than be seated directly in front of the Master’s chair.

Brother Kenneth Yardley Sykes was born in the early hours of 6th November 1943, in a small boarding house in Leopold Grove, Blackpool, the son of Dorothy and Wilfred Sykes. He attended St John’s school, then at 11 years of age moved to Tyldesley, and later Blackpool Technical College in Palatine Road, and he excelled in Geography and Maths.

On leaving school, his first job was with the Department of Employment in Reading, and he returned to Blackpool approximately 18 months later. Five years later he was promoted to the position he enjoyed the most, that of a Careers Officer attending schools. Later he returned to the Department of Employment and received promotion to manager, initially at Towngate in Leyland, then Thornton, Blackpool, Preston, and St Annes. Retirement beckoned at the age of 50 years.

He married Marjorie on the 12th July 1969 moving into Epsom Road, Norcross, and they were blessed with two beautiful daughters Debbie in 1971, and Julie in 1973. The family was completed with the addition of 4 lovely grand daughters. 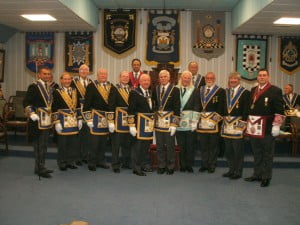 Ken was proposed into Freemasonry by his father WBro Wilfred Sykes when he was 21 years old, so he is a Lewis. He was seconded by Uncle Harry, better known as WBro Harry Lamb, balloted for on the 23rd April 1965, and initiated on Friday 24th September 1965, at the Imperial Hotel Blackpool. At this juncture, the Acting Secretary, Ken Buckley read out a précis of the minutes of that meeting. The ceremony was carried out by the WM Bro Jack Harries, and Ken’s father being SW presented his Apron to him. He was passed in November 1965 and raised in January 1966, which was very quick for those days.

In March 1977 when he was installed as WM, his father presented him, and carried out the address to him. The Installing WM was WBro Eric Culpin, and the representing officer was WBro JNJ Hagan PAGDC.

He has held a succession of Offices in the Lodge, namely Assistant Secretary, Treasurer, ADC, DC, Lodge Mentor , Almoner and Lodge Auditor , and he is the Royal Arch Contact.

He was appointed PPrAGDC, in Provincial Grand Lodge in 1991, and promoted to PPrGSuptWks in 1998, receiving a further promotion to the high rank of PPrJGW in 2008.

Ken was exalted into Tithebarn Chapter on 4th March 1992, and installed as first principal in May 2001. He has served as Charity Steward, ADC and DC. His first Provincial Rank was PPrAGDC, and he was promoted to PPrAGSoj in 2008.

Towards the end of the presentation, Ken received his certificate in recognition of 50 years in Freemasonry from the Group Chairman, Duncan Smith.

The WM resumed his rightful place in the lodge and thanked W Bro Harry Cox for a splendid presentation.

The lodge meeting was followed by a sumptuous meal and further praise was bestowed upon W Bro Ken Sykes. This special evening was concluded with the Tyler’s toast from Bob Sims.