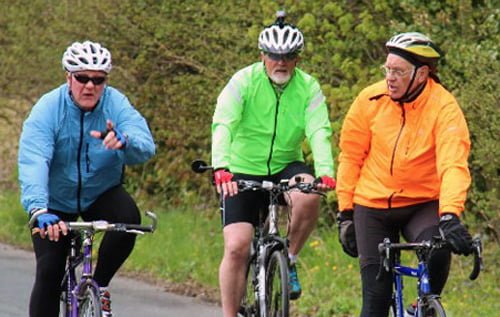 The weather looked a bit grim but then such was the prognosis for a Sunday morning in spring which found cyclists from the Preston and South Fylde Groups gearing up to tackle the Preston Guild Wheel yet again. Others, prefering a more sedate pace, opted for a six-mile walk. The object of the exercise was to raise money for charity. Following the successful event last year, Geoff Saul had again arranged this hike and ride to raise money, this year for the West Lancashire Freemasons’ Charity.

Pictured from left to right, are: Dave McKee, Dave Barr with a camera on his helmet, and Tom Cutler.

As ever Dave McKee was on hand to check everyone’s bicycles. Preston Group Chairman Steve Bolton was on hand with certificates for those who completed the course and group publicity officers Phil Cragg of Preston Group and Glenn O’ Brien from South Fylde Group were on hand to record the event with cameras and pens at the ready. John Ogden also weighed in with some useful photographs.

At 10am the riders set off along the banks of the Ribble to tackle well known territory. The hikers lingered a few moments more to pose for photographs and were led off to what became a rather wet walk on a shorter route. Needless to say the walkers had refreshment stops planned.

The rain held off pretty well until about 12:30, which proved an advantage to the bike ride leaders, five of whom returned mob handed and deliberately crossed the line side by side to avoid any winners or losers, which was very ‘team spirited’ of them. They were John Parkinson, Dave McKee, Ian Ward, Dave Barr and Tom Cutler. They were soon proudly posing with their certificates, presented by the Chairman of Preston Group Steve Bolton. 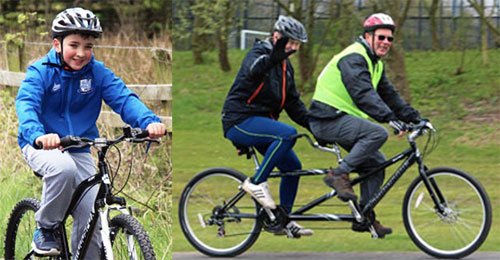 Shortly afterwards Howard Linaker and Bernard Tagg crossed the line, with Bernard proudly announcing a few minutes over two hours was his best time ever, adding that this was due to eschewing the temptation of refreshment stops.

There were three generations of the Saul family taking part with Geof Saul, his son David and his grandson William. They experienced technical problems with William’s bike but overcame this to complete the course at a more leisurely pace which included a refreshment stop at the Continental, with Tom Ashcroft who had stayed with them despite the delays. It was here that William took on some extra energy in the form of a J2O. Granddad Geoff said: ”He was jet propelled for the final couple of miles.”

South Fylde Group secretary Dave Barr decided that he would film his progress around the course by attaching a video camera to his helmet. Dave McKee declared that to be a waste of time as Dave Barr was tailgating him the whole way, to reduce wind resistance and preserve energy. As in last year’s event, a tandem team was involved. This year John Baron was at the sharp end with Richard James in the engine room. They had already completed half the course as the others set out, so when they returned to their starting point, they peddled off for an early bath.

There were some late starters who peddled like crazy to catch the others up. One of whom was Dave Kenworthy who achieved a very creditable time of two hours and 10 minutes. Alas, his late start meant that he finished the course in lashing rain. His arrival coincided with the bedraggled appearance of the hikers, who were paying the price of their leisurely potter around Preston.

The leaders approach the finish line.

The walkers had opted for a shorter walk around the Guild Wheel Route. From the start they set out along Rivers Way to Lea Gate, then along the canal. They stopped for a break at the Final Whistle Café, located in the Sports Arena in Cottam.  Contrary to expectation, vino collapso was not planned, although Helen Barr ruined her diet for the week by succumbing to the lure of a ‘breakfast smoothie.’ She always was a sucker for a milkshake! Meanwhile, John Robbie Porter wouldn’t sit down for fear of stiffening up in all the wrong places.  Restarting, they went onto the three locks and then back along Peddars Lane to start point. The luxury of a stop may have been ignored had they realised that the last half hour of their walk would be in the pouring rain.

Leading the hikers home was Assistant Provincial Grand Master David Winder and his ever supportive wife Sue. Very little seems to dampen David’s spirits, a ‘wee drop of rain’ as he put it, ‘only gets you wet!’ He congratulated everyone for taking part, particularly Geoff Saul and Steve Bolton for their hard work in organising the event. South Fylde Group Chairman Ian Ward thanked everyone for their support and was pleased to see so many people congregating at the end. Luckily he counted himself amoungst those finishers, as he had taken a wrong turning at one point and nearly ended up cylcling along the M6 motorway. Not even J2O could have raised Ian’s speed to 70mph!

Hikers and cyclists preparing to start.