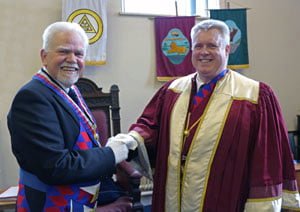 The installation meeting of Jubilee Chapter No 5555 saw Charlie Sweeney attain the first principal’s chair in a well-directed ceremony. The principal guest on this occasion was Assistant to the Provincial Grand Principals David Randerson supported by the Provincial Scribe Nehemiah Tony Hall and Preston Group Vice Chairman Geoff Saul.

After conducting the administrative business of the chapter the first principal Frank Moss welcomed David into the chapter. In return, David acknowledged his kind words of welcome saying he was looking forward to an enjoyable evening as a guest of the chapter.

The ceremony was carried out in a sincere and dignified manner as Ray Birkbeck presented the third principal elect Alan Duffin for installation in the third principal’s chair. The third principal, Alan Howarth proceeded to inform him of his duties and following his obligation, the scripture reading was delivered in a well-rehearsed manner by Jim Bennett.

Alan Howarth, as second principal elect, was in turn presented for installation to the second principal Charlie Sweeney. In this instance the scripture reading was delivered in an equally eloquent manner by Michael Threlfall Jnr. Finally, Malcolm Dukes had the pleasure of presenting Charlie as the first principal elect, to the first principal Frank Moss with the scripture reading being again delivered to a high standard by Adrian Dixon.

The associated prayers for all three offices were delivered by Ray Birkbeck. The scarlet robe address was given by Mike Threlfall Snr, the purple robe address by Bill Struthers and the blue robe address by Jim Bennett, all of which were delivered to the expected high standard. Having been installed in their respective chairs, the three principals were declared as being in office by the DC Mike Walkden. The address to the principals was delivered in his usual excellent manner by Bill Woods and the final address, that to the companions, in an equally admirable presentation by the principal guest, David Randerson.

At the conclusion of the installation ceremony, David brought the congratulations of the Grand Superintendent Tony Harrison, wishing the principals well during their year in office. David continued by also congratulating Frank Moss for his part in installing his successor as first principal, thanking him for all the work he had done for the chapter and the Royal Arch during his year in office. He concluded the good wishes of the Grand Superintendent by congratulating all the companions of the chapter who had taken part in the installation ceremony.

The work in the chapter concluded with Ray indicating future work for the newly installed principals by proposing a brother from Lodge of Endeavour No 7036 for exaltation as a future companion of the chapter.

Later in the evening in response to the toast to the grand officers, David gave his own congratulations and good wishes to the three principals, all of whom are occupying their positions for the first time, and to the companions of the chapter. Particular mention was made of the work of the previous first principal Frank Moss and he congratulated those that had taken office wishing them all well for the future.

He thanked the group vice chairman Geoff Saul and the Provincial Scribe Nehemiah Tony Hall, for their attendance and support and continued by thanking the chapter companions for the very generous donation in aid of the Rosemere Cancer Foundation made earlier in the evening.

Turning to Masonic halls, David was pleased to note that opening the use of the halls to outside people and organisations had made a significant difference to their financial standing. However, whilst thanking the companions for their donation to the Masonic hall, he reminded them that they should always keep in their minds that the continued survivability of the halls is of paramount importance for the success of Freemasonry.

David went on to mention that the Province would soon be going into the next festival that would inevitably divert charitable donations away from the regular Masonic charities. However, he urged everyone not to forget local charities and in particular, the West Lancashire Freemasons’ Charity giving it maximum support up to the start of the festival. That way Masonry can make a significant difference in the local communities. He concluded his response by encouraging the companions to continue to enjoy their Masonry and thanked all for what had been a very enjoyable evening.