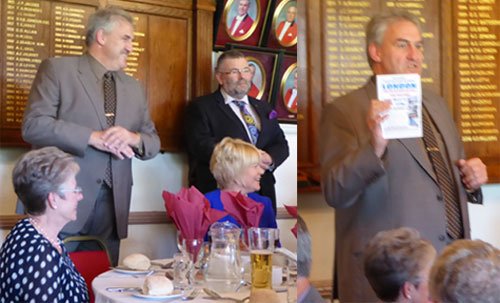 Some 78 Masons and their families joined Woolton Group Chairman Andy Whittle and our two previous group chairmen David Hawkes and David Hilliard, at Woolton Golf Club for another of the Sunday carvery lunches. This has become a regular feature of the group’s activities but today’s meeting was a little bit special.

Andy Whittle opened the lunch by welcoming everyone and said that the food would be served from the adjoining dining room as there were so many in attendance. There would, of course be the usual raffle and the money raised would be donated to Andy Mooney, of Princes Park Lodge No 4769 who also meet at the golf club, for the Wingates Brass Championship Section Band based in Westhoughton, Bolton.

Wingates Brass Band has been in existence since 1874 with some 32 current members, varying in age from 16 to 56 and experience from music students to engineers! The band is currently ranked 30th in the world rankings and have just qualified for the National Championship final at the Royal Albert Hall in October. Recent concert venues include the Victoria Hall, Bolton, Clitheroe Arts Festival and St George’s Hall, Liverpool for a charity concert in aid of Clatterbridge.

The Band has been regularly featured on radio, (Listen to the band with Frank Renton on Radio 2) and has a large collection of recorded CDs. They have also appeared in the stage production of Brassed-Off and recently recorded some music for a forthcoming musical. Wingates is a registered charity but sadly with no sponsor as of yet, although they are trying! Funds raised are entirely down to band events and donations from their supporters club. The raffle raised the sum of £315. Further details of the band may be found on www.wingatesbrassband.co.uk

In response Andy Mooney thanked the group for the outstanding amount of money that has been raised saying: “I know that the band will be incredibly grateful for your very kind donation, as am I. Over the next few months the band will be working very hard in trying to raise the money that is required to enable us to represent the North West at the National Finals at the Royal Albert Hall. This contribution will be included in our Royal Albert Hall fund.” 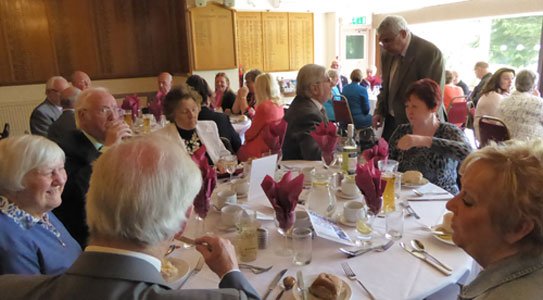 Diners settle down for the meal.

After the excellent carvery meal Andy Whittle informed members that a trip to London had been arranged for March 2017 which would include a coach to London, two nights B & B at the Guoman Tower Hotel with a three course dinner on the first night; a visit to Grand Lodge on Saturday morning, followed in the evening by a Showboat Thames cruise with dinner and entertainment. On Sunday after breakfast a waterbus canal trip along Regents Canal and a visit to Camden Market. Tickets have been selling fast!

Andy informed everyone that after some subterfuge this Sunday carvery lunch had been postponed from April in order to honour the group’s retiring vice chairman Vic Albin who has served the group loyally for many years, first as secretary and then as vice chairman. To mark the occasion several gifts were to be presented to him. Vic was overwhelmed by everyone’s good wishes and having composed himself thanked everyone for their friendship.

The group chairman then informed everyone that Vic had agreed to spearhead the tercentenary celebrations committee for the group. There was rapturous applause for Vic.

Andy Whittle then presented flowers to Sue Poynton thanking her allowing Kevin to join on so many occasions and also to Beryl Albin.

After an excellent meal and good company people departed to enjoy the rest of the day.