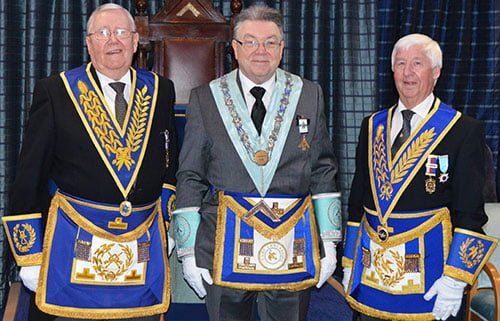 The representative of the Provincial Grand Master at the installation meeting of Aegis Lodge No 9115 was that very well-known and respected local Mason Jim Woods, who was attending to witness the proclamation of William McGhee (Bill) as master for a second successive year. Accompanying him at Wyrebank, Garstang was Jim Wilson Lancaster and District Group Chairman, together with acting Provincial grand officers John Holmes Provincial Senior Grand Deacon, Robert Treharne Provincial Assistant Grand Sword Bearer and Scott Devine Provincial Grand Steward.

An interesting and surprising fact emerged at an early point in the ceremony when it was revealed that this proclamation would mark the seventh year that Bill had occupied the chair of a lodge. As a very active Mason in the neighbouring Province of East Lancashire, he had ‘clocked up’ five years of mastership in other lodges! It wasn’t therefore at all surprising that a large contingent of East Lancashire Masons had travelled to Garstang to support Bill in his seventh year.  Once again there was also a very welcome splash of colour in the room due to the attendance of a deputation from Lodge Salfire No 1505 Scottish Constitution, who were making one of their regular visits owing to their common association with Aegis Lodge through the Fire and Rescue services.

The prompt despatch of regular Masonic business by the master ensured that Jim Woods and his accompanying guests were admitted into the lodge quite promptly, thus allowing the proclamation to be made. The address to the master was skilfully given by Bob Tinsley, that to the wardens was delivered with equal care and precision by Colin Muirhead of Lodge Salfire and the address to the brethren was superbly handled by Jim Woods. 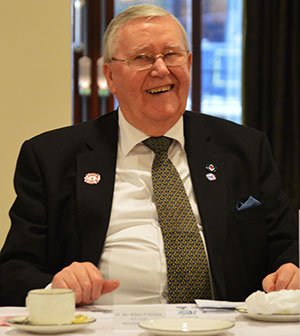 Jim Woods enjoying the fine food and company at Wyrebank.

The greetings and congratulations of the Provincial Grand Master Tony Harrison were communicated at the appropriate time by Jim Woods and he expressed on Tony’s behalf, appreciation and recognition of the work undertaken by all who had participated. Jim was then presented with a cheque for £300 in favour of the Province of West Lancashire MCF 2021 Festival and was notified that the lodge would be shortly making additional charitable disbursements. The lodge’s generosity was gratefully acknowledged.

At the festive board held in the Banqueting Suite at Wyrebank, the diners enjoyed yet another fine combination of good food and service from this popular venue. In his response to the third toast, Jim Woods tendered his own congratulations and expressed admiration for the commitment shown by Bill McGhee in leading the lodge for another year. This allowed younger and less experienced members sufficient time to progress towards ‘the chair’ and as Jim noted, was a ‘sensible and prudent’ act. In his remarks he touched on a number of salient issues, especially recommending the recent changes to the care system in the Province as an ‘excellent development’. He remarked that these changes now released almoners from administrative duties and allowed them to concentrate on visiting and supporting brethren and their dependants. He concluded by thanking Jim Wilson for affording him the opportunity to represent the Provincial Grand Master and also thanked him for his company at the meeting.

A musical tribute to the newly proclaimed master was excellently performed by Bob Tinsley with accompaniment by John Whittall and this brought the enjoyable evening to a conclusion.