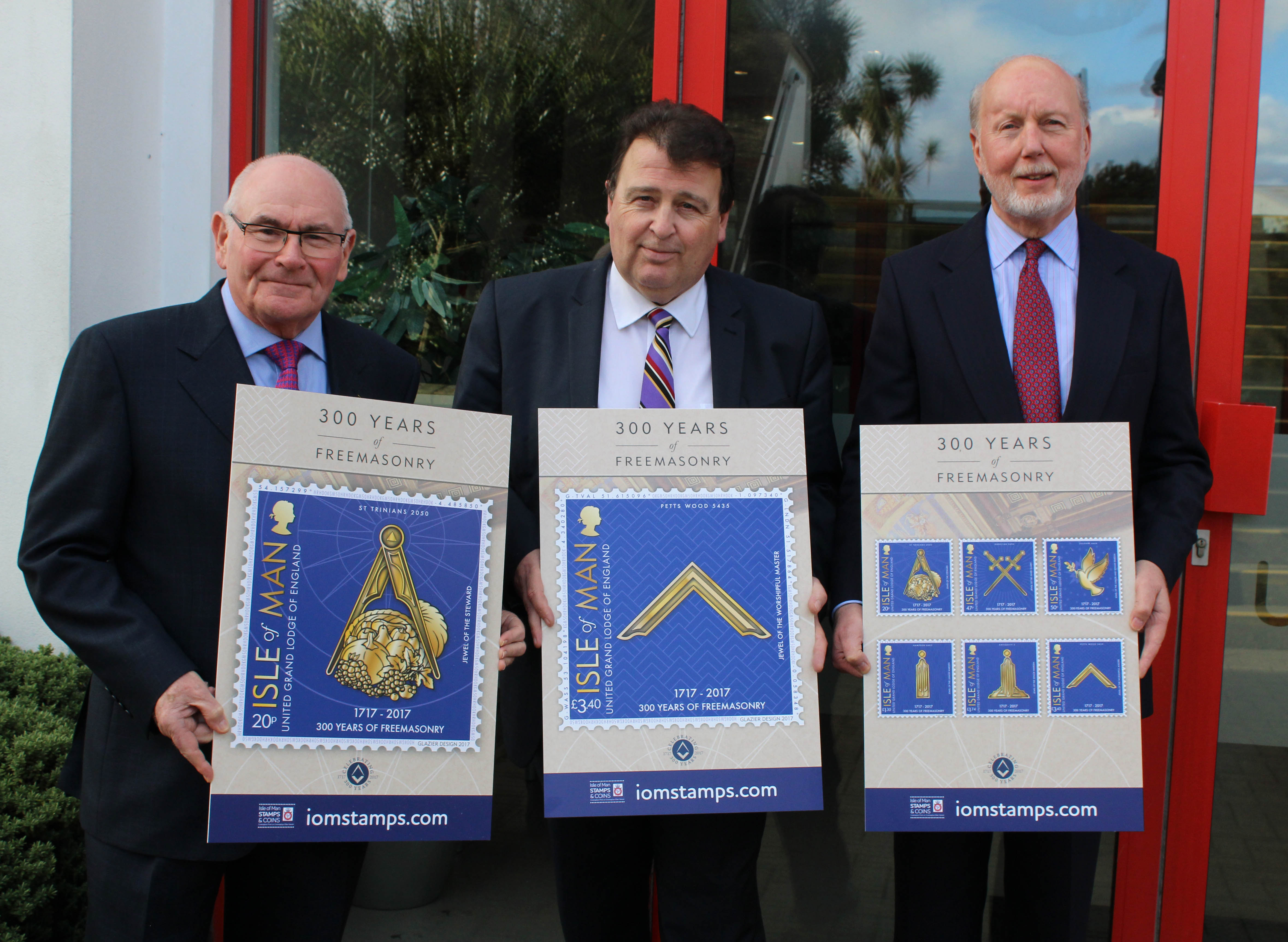 The set of six stamps have been created together with London Design Agency, Glazier Design with the cooperation of the United Grand Lodge of England and include images that react to UV light.

2017 marks the tercentenary of English Freemasonry’s first Grand Lodge and Isle of Man Post Office is marking the occasion with a set of six amazing stamps. The stamps are filled with symbols and references including a hidden logo only visible under UV light, GPS references to places important to Freemasonry, and a subtle ribbon honouring the 50th year of office of the current Grand Master, HRH the Duke of Kent. Notable previous Grand Masters have included King George VI who on his accession to the throne, like all his predecessors, resigned all masonic offices. However, at this point he was invested as a Grand Master of England on 30 June 1937 in celebration of his coronation. Interestingly, his father, George V was a prolific stamp collector who had inherited the Royal stamp collection from his father and Freemason, Edward VII. Edward had purchased the collection from his brother, Prince Alfred, who was widely known as the first serious collector in the Royal Family.

The hidden logo that is used on the stamps is a security ink printed device which is the official logo of the UGLE Tercentenary and has been officially approved for use by the Grand Lodge. The logo will also become visible through the postal system as items are scanned as well as under UV light.

Freemasonry is a “system of morality, veiled in allegory and illustrated by symbols”. The society instils a moral and ethical approach to life in its members based on integrity, kindness, honesty and fairness.

The collection features architectural elements from the lodges of England and the Isle of Man as inspiration for the background illustrations. The main features however are the badges of office of the senior officers within the lodge.

The 20p stamp bears the badge, the Jewel, of office of The Steward on a background of geometric patterns. The jewel represents a cornucopia or ‘Horn of Plenty’, a symbol of abundance and plenty. The GPS reference is the Freemasons’ Hall in the Isle of Man.

The 1st Class stamp depicts The Inner Guard’s jewel, two swords in saltire with a backdrop of Art Deco lines. The GPS reference is that of the Grand Master’s Throne in the main lodge room at Grand Lodge, Queen Street, London.

The 50p stamp shows the jewel of the Junior and Senior Deacons, a dove carrying an olive branch, symbolising a faithful messenger, on a background of stars. The star design is taken directly from the ceiling of the Great Hall at the Grand Lodge. The GPS reference is of the Freemasons’ Hall in Bristol.

The £1.30 stamp bears the jewel of the Junior Warden, a plumb rule, symbolising moral uprightness and integrity, on an Art Deco pattern. The GPS reference is for the Masonic Memorial Garden at the National Memorial Arboretum in Staffordshire.

The penultimate stamp, £1.74, depicts the jewel of the Senior Warden, a level, which symbolises equality on a background inspired by the windows of the Freemasons’ Hall in the Isle of Man. The GPS reference is that of the blue plaque marking the site of the Goose and Gridiron Public House in St. Paul’s Churchyard where the first Grand Lodge was formed 300 years ago.

Finally, the £3.40 stamp bears the jewel of the Worshipful Master, the square, on a background of overlaid right angles. The square represents morality and is the symbol of regulated life and actions. The final GPS references are very significant as they represent the charitable giving of Freemasons and refer to three landing pads of the Air Ambulance service in Caernarfon (Wales), RAF Benson (Thames Valley) and Royal London Hospital (London). The GPS references are accompanied by the Call Signs of the helicopters that have saved so many lives.

In the accompanying text, Provincial Grand Master of the Isle of Man, Keith Dalrymple, provides an insight into Manx Freemasonry which has a similarly proud and colourful history. Originally, lodges met from 1765 under the auspices of the Grand Lodges of Ireland and Scotland. Then in 1864, the first Manx lodge, ‘The Athole Lodge’ was founded under the Grand Lodge of England. Subsequently, Freemasonry flourished and the Isle of Man now has 19 lodges, one of which is named after the world famous TT races.

Whilst rightly proud of its 300 years of history, the United Grand Lodge of England is now looking forward to the next three centuries, which is symbolically reflected in this innovative and creative stamp issue.

Isle of Man Stamps and Coins General Manager Maxine Cannon added: “We are pleased to release this innovative and creative set of stamps to mark 300 years of English Freemasonry. We have worked very closely with the United Grand Lodge of England, in particular Mike Baker Director of Communications, and on the Isle of Man, Keith Dalrymple and Alex Downie, who have provided us with a wealth of material and thank them for their time, knowledge and assistance in making this such an interesting project.”

The Freemasonry stamp issue can now be viewed and pre-ordered at www.iompost.com/freemasons.