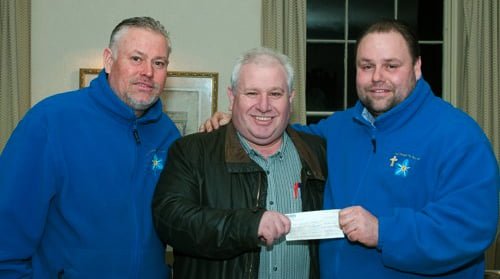 Pictured from left to right, are: Nathanial McGowan, Mike Silver and Ezra McGowan.

During the meeting Gary encouraged the use of the yellow envelope scheme for lodges and chapters and especially for any visitors. The extra 25% gift aided tax relief all adds to the good causes that can be supported.

The grand raffle is the only fund raising event for the West Lancashire Freemasons’ Charity this year. Sales are going very well but a final push is required to maximise the charity’s income. To keep the charity going donations of around £1,000 per lodge are required.

It will be announced at the Provincial Grand Lodge in May that the Province will go into a festival for four years. Full details of the festival will then be made available.

All future giving days will now be put on hold until after the festival ends in 2022.

Two brothers from the South Eastern Group, Ezra and Nathanial McGowan then spoke about the ‘Forget me not Trust’. Ezra and Nathanial formed the trust to help homeless and destitute people within the Manchester area by providing warm clothing and blankets, as well as food and other essentials for people who live on the streets. They said that they were out most nights distributing support to the needy. Ezra and Nathanial support Ecclesholme by providing free fruit juices each month.

Jason Bond said that he could organise a donation of bedding and clothing. Mike Silver presented Ezra and Nathanial with a cheque for £250 on behalf of the Chorley and District Golf Society.

At the end of the meeting Gary thanked everyone for attending and giving their support.