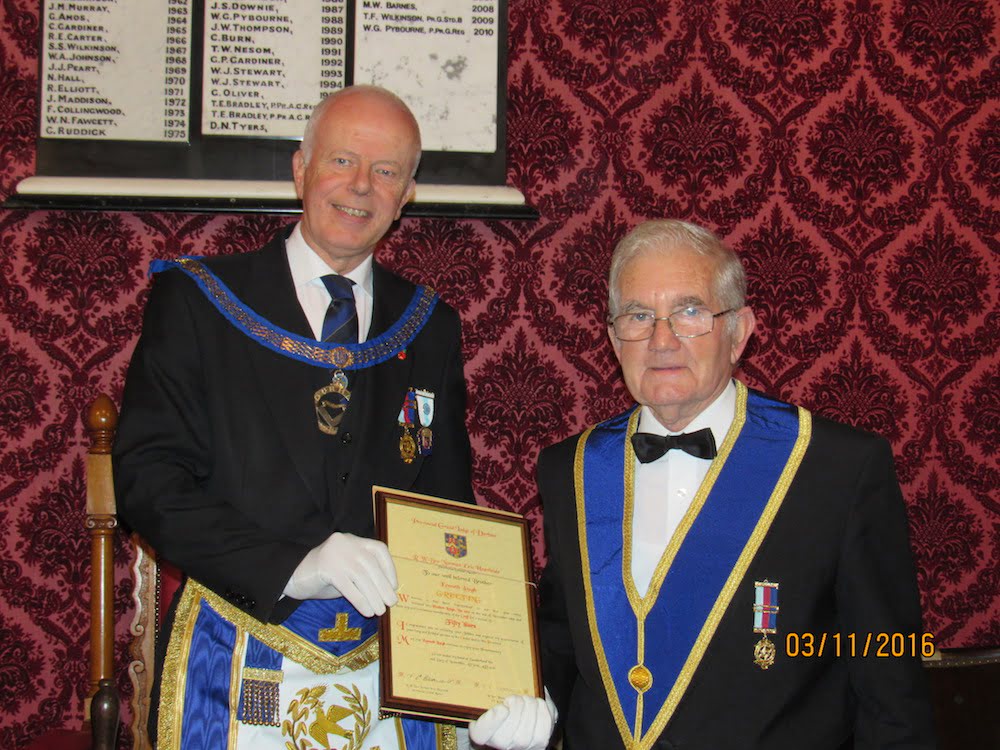 There are some beautiful villages dotted about Weardale and Teasdale areas of County Durham. Many families have for decades resided and worked in close knit communities. An active part of those communities is Freemasonry.

Take for example Hudson Lodge, who meet at the ‘Old School’ in Wolsingham. The school was opened in 1614 as a free school in which selected boys would be taught ‘the rudiments of religion and grammar’. The school was rebuild on the same site in 1786 and when the new Grammar School moved to a new build at the West End of Wolsingham in 1911 and the old building became a Freemasons Lodge.  Membership of Lodge over the years has included many respected individuals who former part of the rich tapestry of country life and tradition. One such character is Kenneth Lough, who is also known affectionately as Kenny.

Kenny was born on the 4th October 1933 and lived on a farm in the Satley area before, at the age of fifteen the family moved to Bradley Hill Farm, Wolsingham and then to Redgate House Farm in 1955.

During those years he attended Tow Law Junior School and one of his class mates was Harold Butterfield. He was brought up in the world of agriculture and farming. In 1959 he married Joan and in 1961 his son was born. This year marked their fifty seventh year of marriage. It is also the year that Kenny marks 50yrs years in Freemasonry.

Kenny was initiated into Hudson Lodge on the 2nd November 1966.  The regular meeting his Lodge fell exactly fifty years to that date. So it appropriate that a similar number of brethren attended to celebrate his golden jubilee in Freemasonry. The Assistant Provincial Grand Master, David Sanders Hay was in attendance to present Kenny with his certificate from the Provincial Grand Master.

Many of the facts already stated were shared with the brethren by David as he sat in the Masters chair. He gave an overview of the masonic career of Kenny who had served as Master of Hudson Lodge in 1983 and again in 2007. He was a Founder Member of Weardale Lodge of Installed Masters in 1995, serving as Master in 2003, currently holding the position of Lodge Almoner.

In Royal Arch Chapter, Kenny was exalted into Hudson Chapter in 1969 and became First Principal in 1989.

Outside of Freemasonry Kenny had other interests.  In his younger days he was a keen sportsman but while playing for Crook and District Boys sustained a back injury which proved troublesome all his life. However, he played cricket for Wolsingham until his early forties.

From the age of sixteen years he took an active interest in the annual Wolsingham Show, this interest developed into him becoming Chairman and latterly it’s President.

In addition to those duties he became interested in race horses which eventually led to the Chairmanship of the British Harness Racing Club, which he held for eight years. During that time he attended World Conference in Tornoto on behalf of the United Kingdom.

In conclusion and while presenting Kenny with his certificate the David Hay stated that over the past fifty years he had attained high standards which had been recognised by his fellow brethren who hold him in the highest regards. They all wished him well and offer their sincere congratulations in the hope that he will go on to enjoy many more happy year’s amongst them. Those wishes were converted in physical acknowledgement by way of a present namely a fine malt whisky. For his part Kenny expressed his appreciation with a trip down memory lane with many anecdotal examples he shared with the brethren.