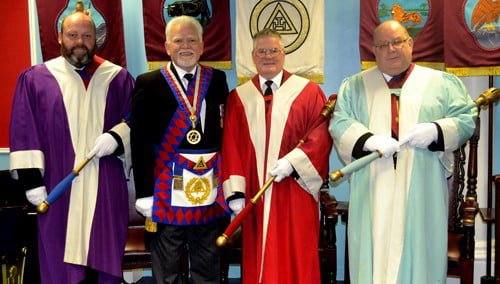 There were in excess of 60 companions who all witnessed an excellent ceremony which was well managed by David Harrison, director of ceremonies of this very prestigious chapter.

The scripture readings and prayers were faultlessly delivered by Keith Bennett, Derek Robinson, Gary Smith, Gary Fisher and Ken Bowker and these were matched by the excellent robe addresses by David Worth, Peter Rees and Steven Greenhalgh.

The companions retired to the festive board for an excellent meal with good wine and most of all exceedingly good company, the icing on the cake being David Harrison’s bravura rendition of the principals’ song accompanied by organist Ray Dainton.