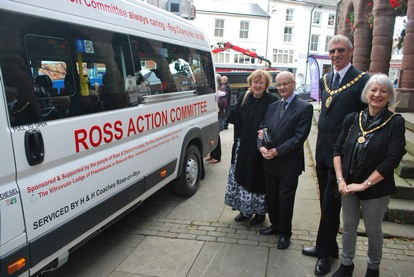 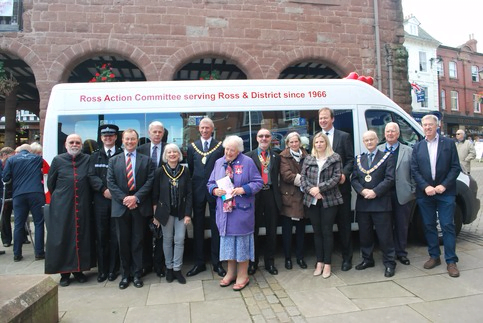 Herefordshire Freemasons have donated £4,000 to a project in Ross on Wye for a new Community Bus, to provide transport for housebound, blind, elderly, and disabled local people. £3,000 was donated by Vitruvian Lodge, and a further £1,000 by the Herefordshire Masonic Charity Association.

A total of £40,000 was raised by the Ross Action Committee, chaired by Rosemary Rigby, who thanked the ‘wonderful organisation of the Masons’ for the contribution. A number of donors and dignitaries spoke at a ceremony to launch and to bless the bus held in the market square in Ross. Among those speaking was the Right Worshipful Provincial Grand Master for Herefordshire, The Rev’d David Bowen, who mentioned the Tercentenary of Grand Lodge and the recent 200th anniversary of Vitruvian Lodge, of which he is a member, in 2013. He said that local Freemasons were pleased to provide help with a project such as this, providing aid for people with reduced mobility.

The Mayor of Ross, Cllr Nigel Gibbs, also a member of Vitruvian Lodge, thanked Mrs Rigby for the energy and hard work she had poured into the project, and also thanked the drivers and those who would keep the facility working on a day to day basis.

The top photo shows the group of speakers and donors in front of the bus. It includes The Mayor, Cllr Nigel Gibbs and the Mayoress, Mrs Gill Gibbs (fifth and sixth from left) and the RW PGM, The Rev’d David Bowen (third from right).

The lower photo shows the PGM with Mrs Jill Bowen with the Mayor and Mayoress by the bus, showing the inscription on the side which reads ‘The Vitruvian Lodge of Freemasons in Ross on Wye, celebrating the United Grand Lodge’s 300th year’.