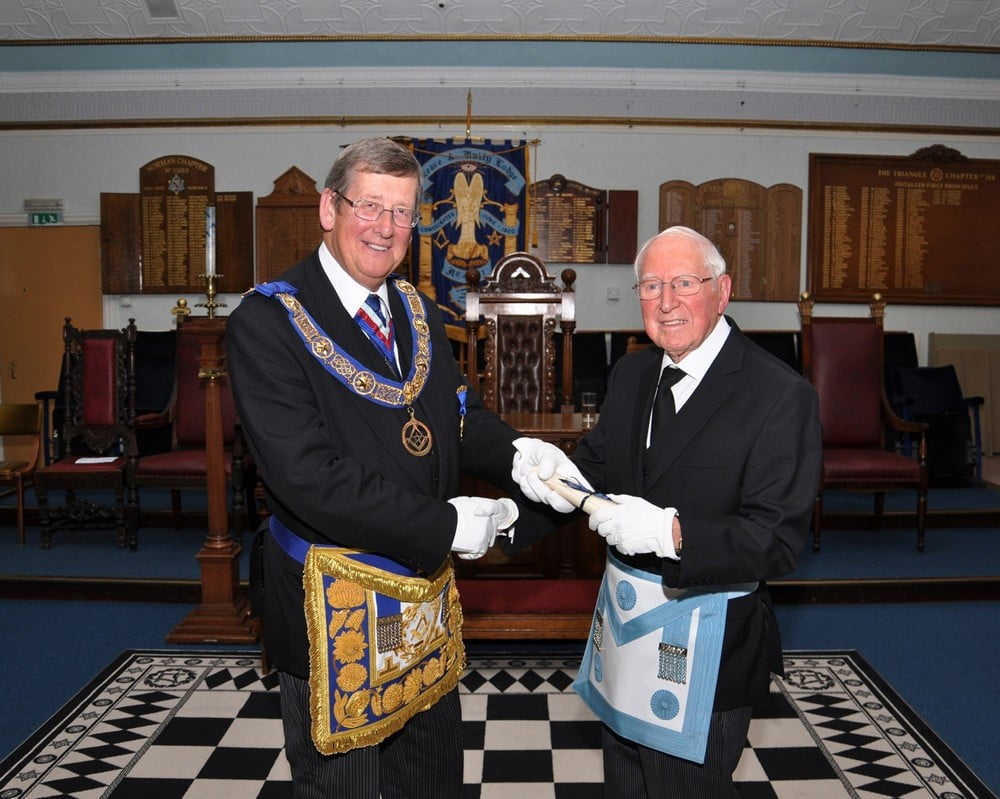 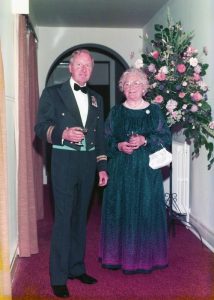 Herbert Hacker and his Mother at RAF Coltishall in 1979

Herbert Hacker of the Peace and Unity Lodge No 4101, celebrated 70 years in Freemasonry on 28th November 2016 and, on the 8th December, he was presented with a certificate to mark the occasion. The long service certificate was presented by the Head of East Kent Freemasons, Provincial Grand Master, Geoffrey Dearing.
Herbert was born in 1923, he started life in Canterbury but, moving with his family, he grew up in Rye, where he was educated at Rye Grammar School. In 1939 the family moved again to Maidstone where, unable to attend university because of the impending War, he started work. He took up a reserved occupation in the design office of Tilling-Stevens in Maidstone, a company that manufactured war equipment such as searchlights, predictors and transport vehicles.
Three years later Herbert volunteered for aircrew flying duties with the Royal Air Force where he trained and qualified as an RAF pilot, training in South Africa in the Transvaal. After his War service he continued flying with the RAF Reserve until they, and the Auxiliary Squadrons, were disbanded around 1952. As Herbert said: “they probably found out what a jolly good time we were having training and flying at weekends, and they were paying us as well!”

However Herbert continued his involvement with the RAF Reserve, serving until he reached the mandatory retirement age of 61 – a total of forty-two years’ service – during which time he was awarded the Air Efficiency Decoration with Two Bars. He spent most of that time as an Air Intelligence Officer which, during the Cold War period, proved to be very demanding but interesting. 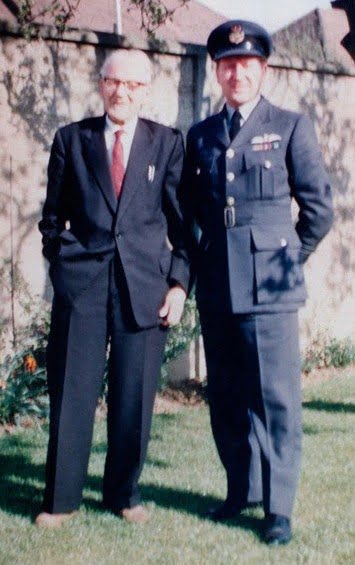 On being demobbed in 1947, Herbert chose to work in architectural design and construction in industry – a profession that took him all over the UK, Ireland and Holland. Twenty years later the company relocated from Aylesford to the Midlands and, for family reasons, Herbert chose to leave them and start his own company providing mechanical handling plant hire equipment. In his civilian life Herbert has also been honoured with the Freedom of the City of London.
At the age of 23, Herbert was initiated into Freemasonry at the Peace and Unity Lodge No 4101, in Gillingham, on 28th November 1946. In so doing he joined his father and uncle who were long-standing members of that lodge. The nature of his employment prevented him from attending regularly but he remained a consistently loyal and supportive member of the lodge for all that time. In recent years with weather and health permitting, he has attended more frequently.
Geoffrey Dearing remarked that he was privileged to be able to present Herbert with his long service certificate – the first seventieth he had presented since becoming Provincial Grand Master five years ago.

The rarity of the occasion was endorsed by former Head of East Kent Freemasons, Past Provincial Grand Master Michael Bailey, who is guest organist of the lodge. He had presented just one seventieth long service certificate during his tenure of office. Geoffrey also handed over several photos of Herbert’s favourite aircraft – the Twin Engine Airspeed Oxford – on which he gained his Wings, saying: “I think you’ll recognise these”.

Herbert was also presented with a gift from the lodge, an engraved plaque of the Airspeed Oxford aircraft.
There were two unexpected coincidences during the evening. It transpired that Herbert’s company was, for many years, a client of the law firm that Geoffrey has now retired from. Also present as a guest of the lodge, was Eric Holder, a resident of the Prince George Duke of Kent Court Care Home. On hearing the details of Herbert’s background with the RAF, it transpired that Eric had trained as a navigator at the same place in South Africa and had followed an almost parallel career but without meeting each other until this evening. 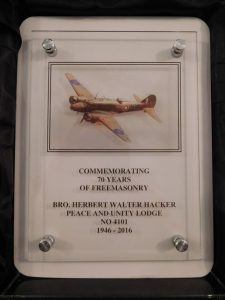 The Lodge gift presented to Herbert marking his 70 year of Freemasonry, from the Peace and Unity Lodge No 4101 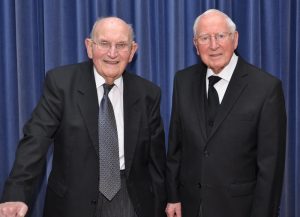