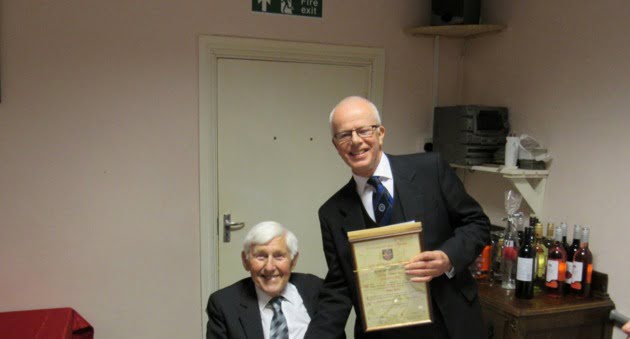 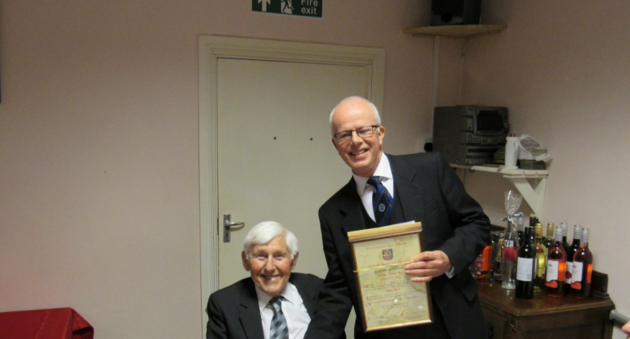 What’s behind a name? Well! The roots of the Hay family are firmly in Billingham. Let us start with George Hay. He is a man who’s is associated in the competitive business in catering, cafes and restaurants. From his first small café which was in John Whitehouse Park, Billingham then progressed to the premises known as the Rendezvous Café and Restaurant in Billingham Town Centre, later expanding to other premises in Norton and Richmond.

George Johnson Hay was born on the 28th of July 1926, being the youngest of seven children.

George’s parents, William and Margaret had four sons and three daughters. Three of those sons, namely Joe, Ron and of course George became Freemasons and all at some points became members of Eanred Lodge based in Billingham Masonic Hall. They were followed by the Joe’s son, David Sanders Hay who of course is currently an Assistant Provincial Grand Master.

Within the history of Eanred Lodge will also indicate the close family ties. When David Hay’s year as Worshipful Master was coming to an end in 1990, a search had to made for a suitable successor because the then Senior Warden resigned his office. David was delighted when his Uncle George agreed to take on that position. It followed that in May 1990, George was installed by David as the Worshipful Master of Eanred Lodge.

So having discovered what is behind the family name of Hay and its connection with Earned Lodge we can understand why David’s close colleague, APGM, Stephen William Walker was only too happy to allow him to make the presentation of a 50yrs certificate to his Uncle George.

For health reason, George has been unable to attend the lodge recently, but is always fondly remember by all the brethren. Planning was initiated to enable his attendance on such a memorable occasion.

All that planning came to fruition at the last regular meeting of Eanred Lodge when members and visitors including the Assistant Provincial Grand Masters, David Hay and Stephen Walker. The business of the evening which included the raising of Steven McWilliams was concluded all the retired to the White Table cloth Festive Board. There the wives and partners joined the brethren. There were then introduced to the guest of honour, George Johnson Hay.

Before commencing the delights of the festive board the David informed the brethren that George at the age of 39 was initiated into Eanred Lodge 50yrs that evening on 13th June 1966. George was in fact the first person to be initiated into the Lodge in the newly acquired premises of Mill Lane. The lodge had been previously met in St Cuthbert’s Church Hall on Billingham Green. George was then already well known to the membership because he and his family provided catering for them.

It was with great pride that David made the presentation of the certificate from the Provincial Grand Master to George who was accompanied by family members. The smile that George gave when he received it said everything with a continued broad beam of pleasure, sentiments reciprocated by David his wife and family.

Find out more about Freemasonry in Durham Here http://www.durhamfreemasons.org/