The New Jersey Scottish Rite Research Guild will host their first presentation by Brother Clifton Truman Daniel: “Harry S Truman – The Character of a Freemason” on Saturday, October 22nd at the Valley of Central New Jersey.

The event is open to all Freemasons, friends and family. It will be hald at the Valley of Central NJ, 103 Dunns Mill Road, Bordentown, NJ. The cost is $35, and includes breakfast and the program.

Brother Clifton Truman Daniel is an author, lecturer, and the oldest grandson of President and Past Grand Master Harry S Truman. (His father was Clifton Daniel, former Managing Editor of the New York Times, and his mother was Margaret Truman, the President’s daughter, who became a popular mystery novelist.)  Brother Daniel is a member of Oriental Lodge No. 33 in Chicago.

Brother Clifton was made a Mason “at sight” in 2011 after receiving the full Master Mason degree by then Grand Master of the Grand Lodge of Illinois, MW Terry L. Seward,  at a special joint ceremony in Joliet, Illinois, with the assistance of the GM of Missouri, MW John W. Hess.

The $35 per person admission is payable by check in advance  to “AASR-COD”, sent to Valley of Southern NJ, 315 White Horse Pike, Collingswood, NJ 08107 (NOTE: This address is different from the actual site of the event.) 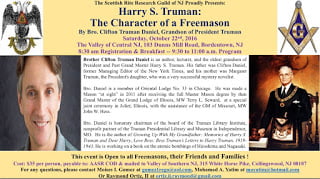 The mission of the Scottish Rite Research Guild (SRRG) is to provide a premier forum for education, research and complete Masonic Enlightenment. The SRRG also provides a platform for enriching its members and allows them to build a fundamental basis for exemplifying the Scottish Rite core values in support of their blue lodges, valleys and other Masonic affiliations. They aim to assist the Scottish Rite in increasing its membership by recognizing scholarly potential and achievement.